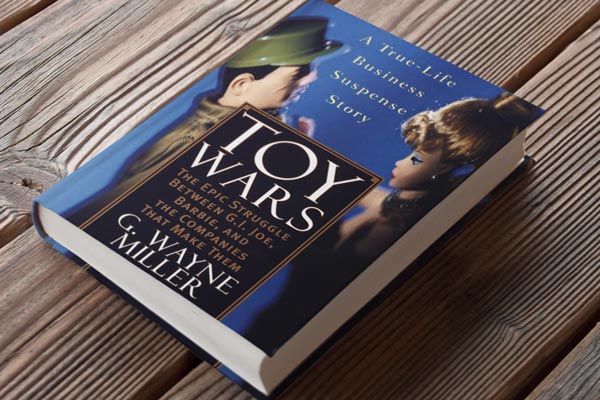 New York Times critic, Glenn Collins, reviewed the book, Toy Wars, upon its publication in 1998. In his review, he described the toy industry as : "…a fad-driven, hit-or-miss fashion business propelled by the merciless necessity to fuel earnings with continual innovation, as toy replaces toy in the rush to cash in and move on."

There is much truth in that statement and it holds as true today as it did when the book was released. Now we learn that almost 30 years after the book's publication, it will be turned into a streaming television show on Amazon. That is according to a Gizmodo article by Germain Lussier entitled "Toy Companies Hasbro and Mattel Will Go to War in a New Amazon Show".

Alan Hassenfeld (pictured on the left) was CEO at the time and he gave the author, Wayne Miller, access to Hasbro's office corridors. The result was a book that revealed the toy industry to be a far more competitive and anxiety producing place than Santa's workshop. Its pages starred people of flesh (Mattel's Jill Barad and Hasbro's Hassenfeld) and of people of plastic (Barbie and GI Joe).

But why now? I found an answer in an article by Deadline Hollywood writer Nellie Andreeva, "‘Toy Wars’ Drama From Josh Gad, Josh Schwartz & Seth Gordon Set at Amazon."

It seems that there is a very personal aspect to the books revival. It turns out that the show's co-author and showrunner, Josh Schwarz, is the son of Stephen Schwartz, one of Stephen Hassenfeld's "three musketeers". (Stephen Hassenfeld was Alan's older brother and one of the toy industry's few, true geniuses). Schwartz, the father, played a key role in making Hasbro the massive company it is today. We can therefor imagine that young Josh heard a lot of toy industry scuttlebutt around the dinner table.

Josh Gad will star and Seth Gordon will direct. Its a great story and I am very much looking forward to watching it. I also want to see who plays Alan.