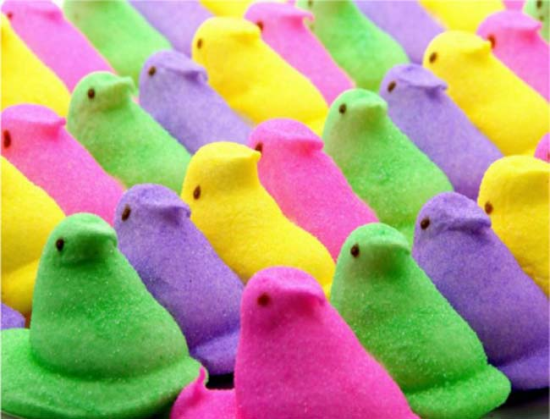 Nothing brings the child out in an adult like Peeps. Invented in 1953 by the "Just Born Candy Company", Peeps were once a child's delight. They were so addictive, however, that they stuck to children's hearts as much as their teeth and have become a mainstay of adulthood.

It appears that Easter, the holiday that is most important to Peeps lovers, may be impacted this year by labour strife. According to a Huffington Post article by Abigail Williams entitled " Worker Strike Could Cause A Significant Peeps Shortage Next Easter", four hundred factory workers have walked off the job at a Peeps plant in Bethlehem, PA over a pension dispute. The strikers motto is: "No pension no Peeps."

This is no small issue. More than 5 million Peeps are produced each day, feeding a hunger of 700 million Peeps consumed each year. Never-the-less, Peeps are said to last a very long time. According to those in the know (this girl I know), Peeps are indestructible and are in fact better when stale. So, you may want to hold whatever Peeps you currently have. They'll still be good by Easter…and beyond.