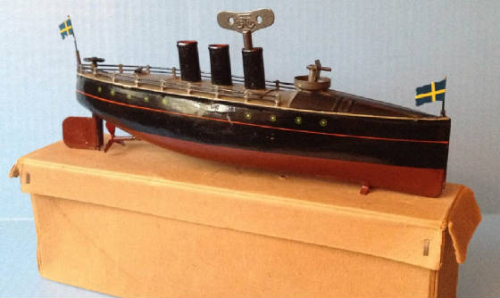 I am currently at the beach and enjoying a nice view of the Atlantic Ocean as seen from the North Carolina coast. It is with that view in mind that I thought it would be fun to research toy boats from the late 19th and early 20th century.

The above torpedo boat was made by Marklin, a German toy company that is still in existence. I think it is wonderful looking and like the way the "key" sticks up out of one of the smoke stacks. What  I find interesting is that the ship was manufactured during World War I. It was wartime so I am not surprised that it is a military ship but I am surprised that metal was made available for toys. It just shows that even in the worst of times, parents want their children to have toys. 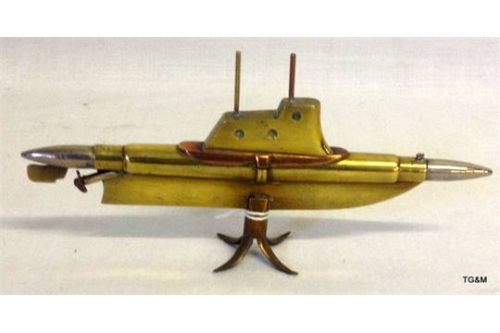 I was not familiar with "Trench Art" but it is a term used for objects made by soldiers while at war. The above piece by an unknown person uses bullets (one in the front and one in the back) as part of its construction. It is hoped (at least by me) that they are not loaded. 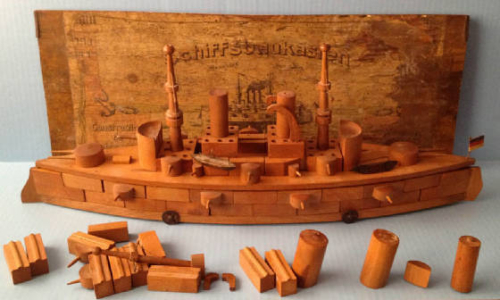 I love the above wooden battle ship. I could not find who made it but it appears to be a construction toy. Its over 2 feet long so it must have been a ball with which to play. I am surprised no one makes something similar today. Very little information is available on this "Submarine Boat" from the 1920's. I enlarged the instructions and they appear to have been in English (page on right) and in German (page on left). It would therefore appear that the toy was  made in Germany for export.