Dallas, Texas (August 8, 2016) Comicon is for EVERYONE.  If you don't read anything else below, know that this event and this lifestyle doesn't judge you on gender, age, race, body image, disability, or anything else.  Fandom is truly universal and in my opinion the key to staying relevant in today's quickly evolving retail landscape.  This is my favorite show of the year, and below are the trends I spotted over the last three days in San Diego.  –Steve Starobinsky, Chief Discovery Officer, Diverse Insights

I.  Harley Quinn (and the female superhero movement):

Harley was everywhere.  Although the Margot Robbie (Suicide Squad) version was more prevalent, the classic, and every combo of Harley was all over Comicon.  Although a villain; Harley's combination of humor, cunningness, sex appeal, and general badass-ness has captured the fandom of millions.  Two things are working in her favor – the general lack of female super humans and the fact that she is loved by both genders of fans.  Early adopter retailers have already reported that Harley outsells both Batman and Superman when compared side by side with similar product; and this is before Harley makes her feature film debut with the most anticipated movie of the summer Suicide Squad (analyst are predicting a $135m opening weekend, source: http://www.hollywoodreporter.com/heat-vision/box-office-suicide-squad-tracking-911029).  Whether you support the movie version or the more traditional animated series/comic style guide; get product on shelf as currently the demand is outweighing the supply. 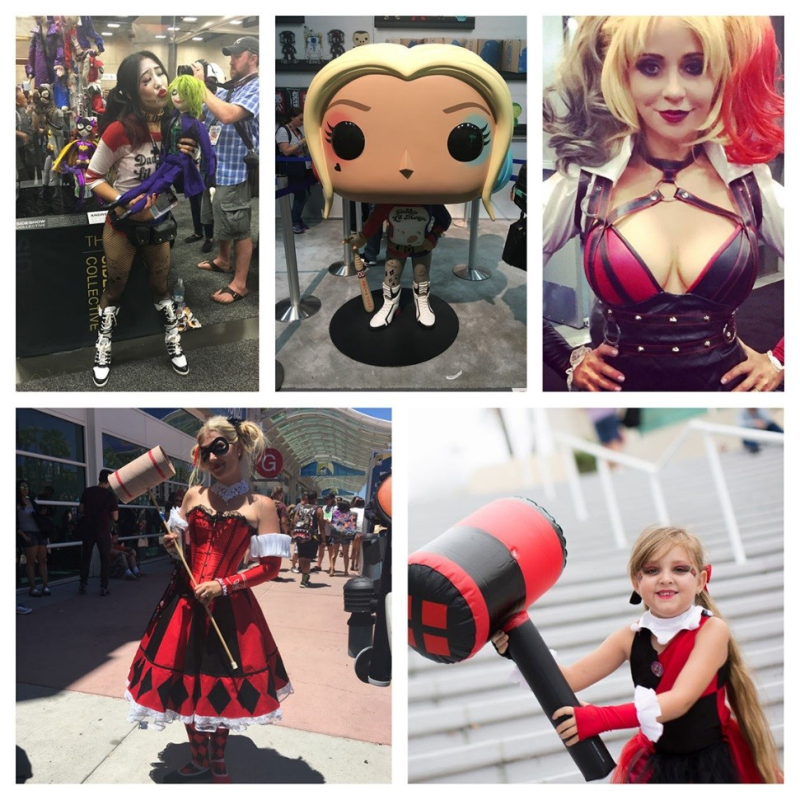 The female super hero trend was in full swing, other popular cosplay options included Rey from Star Wars, Poison Ivy, Wonder Woman, Black Widow, Psylocke, Lady Deadpool and I predict Captain Marvel will be the rising star with Oscar winner Brie Larson cast as the titular character for the July 2018 feature film. Manufacturers are keen on this trend and are offering female specific assortments. Cosplay is tremendously import for me as a trend spotter; it’s an unfiltered view into the fandom of the tastemakers that will make or break licenses/brands.  Here is a deeper dive into the world of Comicon cosplay:

A. The Cosplay Family

What does your family look like?  Over four days in San Diego, they looked like super heroes to me!  A new trend emerged with families attending the show in group cosplay that often stopped you in your tracks just to say "aww."  What an opportunity for us as an industry to embrace brands/properties where the kids ask for them by name and the parents want to buy them because they are fans too.  What a cool way for the two generations to find a common ground and re-define what it means to partake in family activities. Various families enjoying a new version of "together time" Lord Baelish (Game of Thrones) & his little son as Tyrian!

I love this Trend as it really shows off people's creativity.  As cosplay has evolved, there is an underlying competition to bring the coolest concepts to reality and because there are no licensor restrictions when it comes to cosplay – the players can really show off.  I think the industry should be thinking about mashups and combining licenses early on in the PD process to continue to surprise the collector. Females dressing up as male characters and doing it well!  It comes down to the fact that females love comics, pop culture, and fandom as much as males do and the movie/tv studios haven't introduced enough characters for them to embrace.  I think this it’s an interesting conversation to discuss when creating licensed products – could one character exist within both genders? Outside of Harley, Pokemon, & Rey from Star Wars – the #1 most cosplayed property I noticed was Bob's Burger and especially Louise who is voiced by the incredibly sassy and sarcastic Kristen Schaal.  I knew this show had a following but was surprised to learn the fandom that existed for this brand.  I think this is a license that is flying under the radar in the industry and should be looked at further.  The show just completed its 6th season and was recently picked up for two more seasons.  The show has a weekly viewership of 2.8 million people and is FOX's #3 rated animated series (trailing only The Simpsons and Family Guy). Sanrio's introduction of the "lazy egg" is the perfect mix of kawaii (cute) and introvert.  This little egg already has 168k followers on Instagram and is positioned somewhere between Grumpy Cat and Hello Kitty.  Hot Topic is the US launch partner for the brand and product is starting to hit shelves now.  I believe this has something special and stands out from the crowded super hero movement to give consumers an ironically cute candidate for their fandom. If Anime had the same cheeky, satirical, dry humor of The Office you would get One Punch Man.  The show is already one of the most popular in Japan and a top-selling graphic novel.  This past Saturday it premiered in the US on the adult swim block on Cartoon Network – the ratings were incredible it registered as the #2 show overall for any cable programming on Saturday night.