Dynamic sales of LEGO construction sets following the success of the LEGO Movie, along with growing interest in STEM toys, have fuelled global demand for construction toys. As a result, construction was the fastest growing category globally in 2015, but slowing growth in key categories and continuing proliferation of technology into the daily lives of consumers are poised to make remote control toys the fastest growing category by 2020. 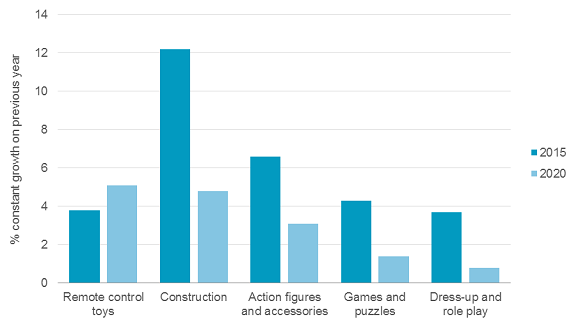 Construction toys is one of a number of categories facing declining growth prospects over the forecast period. Action figures and accessories as well as dress-up and role play saw strong growth in 2015 due to booming sales of Star Wars merchandise, but this momentum will be hard to sustain, even with a new Star Wars franchise film scheduled for every year through to 2020. Construction is another category where  Star Wars and licensing in general had a significant impact in 2015, but much like across most other categories within traditional toys and games the effect of licenses on sales growth will diminish over time as the market becomes increasingly saturated.

Games and puzzles saw increasing interest from a maturing millennial audience nostalgic for traditional board games in a digital age. But, by 2020, this category will also be much closer to saturation, causing a slowdown in growth. Despite the expected growth slowdown in games and puzzles, construction and other categories, they will likely continue to see positive growth as licensing will remain a key growth driver even as its impact decreases from the peak seen in  2015.

As growth in construction toys declines, we are likely to see growing interest in drones as sophisticated automation and automatisation become increasingly common features on affordable consumer-grade drones. These new features, combined with low prices and smartphone connectivity, will continue to make drones increasingly popular toys.

STEM-type functionality is also likely to see a growing presence among drones. Teaching children basic programming skills by allowing programmable routes and flying routines will likely become a key part of the value proposition of many toy  drones.