The Game of The Man In The Moon, McLoughlin Brothers, 1901

It's the 4th of July, the quintessential American holiday, so it seemed an appropriate moment to celebrate some American board games of the past. Did I choose these games because they are classics? No! I chose them because they are so silly / edgy / fun. Enjoy!

The Game of the Man In The Moon (see above) imagines the moon as a big fat guy. It's an eye catching cover and would have certainly stood out on the store shelf. The illustration is very much in the spirit of the time as can be seen by this 1908  image from Coney Island's Steeple Chase Park.

The Game of Nosey involved 48 cards and a paper mache nose.  It comes in a wooden box and what has to be one of the great box covers. 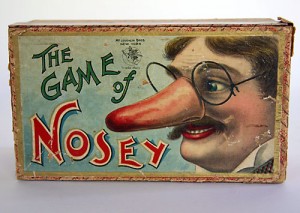 The Game of Nosey, McLoughlin Brothers, 1905

The Game of The Spider And The Bee promises us a boxing match; something that I and I am sure many of you have been waiting to see. Alas, the game does not involve boxing hence the cover's false promise. Never-the-less, it is memorable and a call to action for those inventors who believe a boxing match between insects is long overdue. 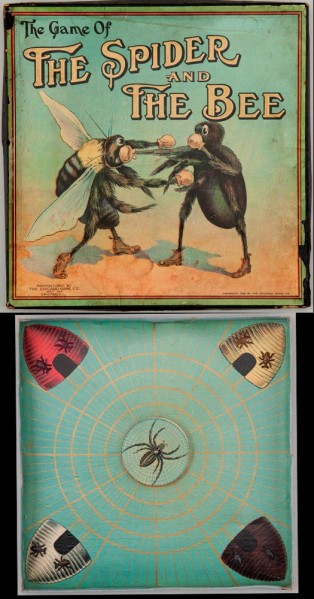 The Game of the Spider And The Bee, Chicago Game Company, 1912

Long before there was Gary Adams and his wonderful "Far Side" cartoons there was "The Game of Bear Hunters." Published in 1890, it shows us that our ancestors had as twisted a sense of humor as we do.