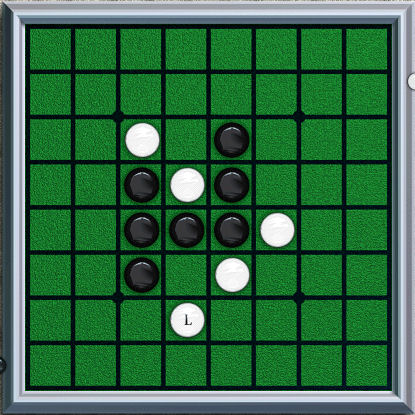 Mr. Hasegawa has flipped all of his stones to black and left the arena. A win for him and a loss for us.

Have you played Othello? If you haven't, you should. It's an incredibly elegant game both in its deceptively simple play pattern and its binary use of black and white. I loved playing it and have some some powerful memories around my growth in skill and eventual mastery of a workable strategy. I can still remember the moment of glory as I finally defeated and never again lost to the person who was my Othello rival.

Its inventor, Goro Hasegawa, passed away on June 20 and I thought it only appropriate to take a moment and remember him and his creation. Mr. Hasegawa, who was Japanese, had a father who was, interestingly, a lover of English literature. Mr. Hasegawa obviously drew upon that connection in naming the game for the theatre's great tragic hero. Shakespeare's Othello is a general who is black. He has a wife, Desdemona, who is white. The play revolves around Othello's fear that Desdemona is betraying him. The name therefore elegantly represents the game's deceptive nature.

I read his obituary in The New York Times and found that not only did I like Othello but so did a Pope and Barry Manilow (Barry Manilow?).  With 40 million games purchased there is obviously a major following; hence there is a World Othello Federation not to mention a championship.

Mr. Hasegawa has flipped all of his stones to black and left the arena. A win for him and a loss for us.