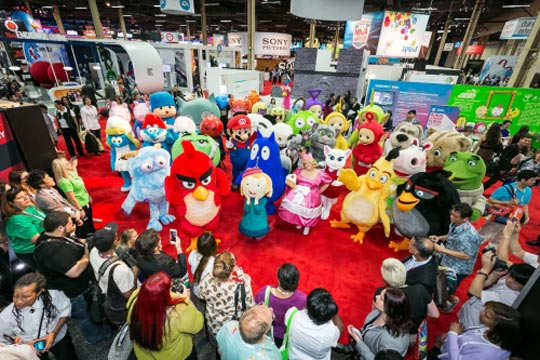 Grumpy Cat was once again present, bringing her furry body and Zen-like countenance to a seemingly never ending line of humans wanting their picture taken with her.

I always enjoy the Licensing Expo. Licensing people are an optimistic group. This makes for a positive environment and this year was no exception. I also find the format to be very open and it is not hard to secure meetings accompanied by content filled conversations.

Attendance looked to me to be about the same. Some thought it was lighter than last year but if it was it was marginal. In fact, the amount of attendees visiting some booths was so great that it was hard to find a seat or to even hear. (That's a good problem).

I have to confess that I love costumed characters. They are cute / funny and make me smile. Its fun to see normally sober adults get their picture taken with a giant Owl or a Yeti.

That is why I am pleased to announce that  the number of costumed characters roaming the floors seemed to be up this year. It may have been my imagination, however,  but I think we are, as an industry, over-indexed on bears.

Grumpy Cat was once again present, bringing her furry body and Zen-like countenance to a seemingly never ending line of humans wanting their picture taken with her. I am shy so declined but am envious of those who did.

What about human celebrities?  In the past there seemed to be celebrities present and they may have been there but I didn't see them. I think they add to the sense of pizzazz that a show like this needs.It would be nice if the big studios brought some of their stars to the show.  Without them I thought that there was a little less excitement in the air.

All in all, a solid show; just not a particularly exciting one.