GIFT SHOP. Those two words might strike fear into the hearts of museum-going parents, but for children who have been bribed into good behavior, it is a beacon. Don’t disappear, don’t have a tantrum, don’t break anything—you may be rewarded with something from the museum’s gift shop. I grew up in Pittsburgh, where we had a treasure trove of museums to frequent. My favorite was the Carnegie Museum of Natural History, whose permanent exhibitions included a hall of minerals and gemstones, a replica of an Egyptian tomb, and intricate wildlife dioramas.  But the biggest draw to the museum was the Dinosaur Hall, which contained specimens from one of the world’s best dinosaur fossil skeletons collections. Everyone—from toddlers to octogenarians—loved to marvel at the massive, reconstructed dinosaur skeletons and the illustrated backdrops. I could have spent hours staring at the teeth of the Tyrannosaurus rex skull or counting the plates on the back of the Stegosaurus ungulatus. Luckily for me, I had a library card to check out kids’ books on paleontology, and parents who were willing to spend a few dollars on a plastic dinosaur figurine each time we left the museum. By kindergarten, I had all but abandoned my Fisher-Price kitchen set and appropriated my play shopping cart as a basket to hold my sizeable dinosaur collection.

“Dinosaur” comes from the Greek deinos sauros meaning “terrible lizard.” However, in the early 1990s, dinosaurs were anything but terrible. These creatures appeared on television programs as well as the big screen, and companies were eager to produce licensed tie-in toys and games. 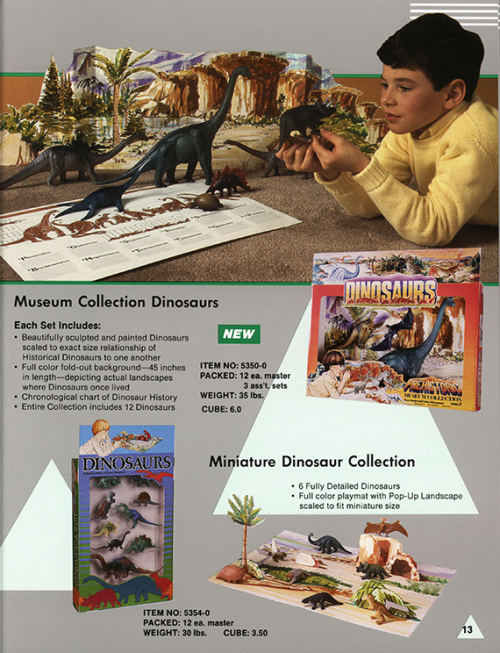 Fans of Jim Henson’s Muppets tuned in to the ABC-produced Dinosaurs, which featured the Sinclairs—a family unit of anthropomorphized dinosaurs living in prehistoric Pangaea. (Remember the piercing catchphrase “I’m the baby! Gotta love me”?) Garth Parker, a premium toy designer whose papers are housed in the Brian Sutton-Smith Library and Archives of Play, helped to create Dinosaurs toys for McDonald’s Happy Meals in 1992.

Then there was Barney, the friendly purple dinosaur, whose preschool audience learned to parrot back the “I Love You” song (much to the chagrin of many frazzled adults and older siblings). Barney & Friends aired more than 250 episodes, featuring simple story lines and “super-dee-duper” educational songs. Companies seized upon Barney’s popularity, producing stuffed animals, board games, and video games.  Greg Hyman, a seasoned electronic toy designer, invented the hit plush Talking Barney for Playskool. His designs for this and many other electronic toys are held in the Greg Hyman papers here at The Strong. The Land Before Time taught its young viewers about different kinds of dinosaurs (with nicknames such as “longneck,” “spiketail,” or “three-horn”), as the orphaned main characters migrated to the Great Valley—and avoided attack from a carnivorous T. rex (or “sharptooth”). Generation Y may vividly recall the dinosaur puppets available for purchase at Pizza Hut, which likely entered their households after cashing in a Book-It pin for a personal pan pizza. (Did you realize that The Land Before Time series has released 12 direct-to-video sequels? The 14th installment is scheduled to be released in 2016.) In 1993, the world witnessed the now-classic tale of a theme park full of cloned dinosaurs run amok. (The film adaptation of Michael Crichton’s Jurassic Park grossed more than $900 million worldwide, which is approximately the same number of velociraptor nightmares it caused.) Universal Pictures planned out a massive marketing campaign, which included action figures by Hasbro, video games by Sega, Happy Meal toys at McDonald’s, and more. The amazing, life-like special effects in Jurassic Park ushered in a new era of computer-generated imagery in filmmaking. Naturally, audiences wanted more, and in time, Universal distributed The Lost World: Jurassic Park and Jurassic Park III. The latest series installment, Jurassic World, appeared in theaters on June 12, 2015 and went on to become one of the year’s biggest hits, second only to Star Wars: The Force Awakens. And we can’t forget:

Whenever I’m back in Pittsburgh to visit family, I love going to the museums with my littlest cousins. “Oh, you’ve been there a million times, but do you want to go see the dinosaurs with us?” their parents say. Of course I reply with a resounding YES, because the thrill of walking beneath the tail of a mounted Diplodocus carnegii will never grow old. And maybe if I’m good, I’ll buy myself a tiny, brightly-colored plastic dinosaur as we exit through the gift shop.