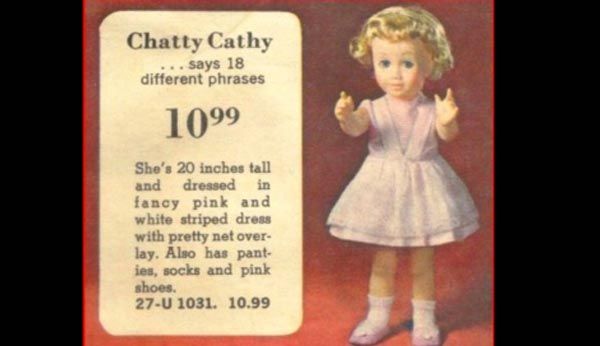 I really don't see this so much as a story about advancements in technology but about  a child's powerful need to objectify that imaginary friend that lives in their head.

I was being interviewed for a documentary last week when the question of "Chatty Cathy" came up. For those of you who are not Baby Boomers, "Chatty Cathy"1, premiering in 1960,  was a talking doll from Mattel. TV commercials abounded and many a Boomer has a memory of having or at least coveting her.

As I began discoursing on this fondly remembered doll, it occurred to me that you could draw a direct line backwards in time from "Chatty Cathy to the "Edison Talking Phonograph Doll"2 (released in 1890) to a French doll produced in 1823 which could say "Papa" and "Maman" through the use of an air bladder.3 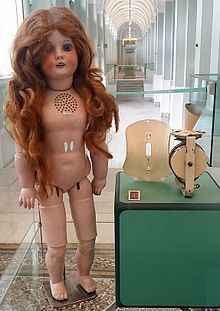 And not just backwards in time. You could also draw a line forward in time from "Chatty Cathy" to "Teddy Ruxpin" (1985) and to last year's "Hello Barbie" (2015). So, in a sense, that early 19th century French creation was the first in a series of dolls designed to meet a child's need to engage their toys in ever more realistic ways.

Don't get me wrong, "Hello Barbie", an empathic doll that not only talks but remembers what you say, is technologically a world away from "Chatty Cathy" and even audio tape driven "Teddy Ruxpin". But in a similar fashion, the Stealth fighter is a pretty far cry from its ancestor, the Wright Brother's bi-wing plane.

Ultimately though, I really don't see this so much as a story about advancements in technology but about  a child's powerful need to objectify that imaginary friend that lives in their head.

What comes next? I am confident that we will see some pretty amazing robot friends within the next decade. How they do, however, may well depend upon the creator's ability to fully appreciate the link between technology and a child's imagination.

1Her magic came in Mattel's having inserted a small record player in the doll's body. By pulling a string a child could play one of 11 messages ("I love you" for example). It seemed like pretty happening technology at the time. After all, prior to that children were limited to dolls that either rolled back their eyes or wet their pants (Really, they did. Check out Betsy Wetsy.)

2As much as the Chatty Cathy seemed revolutionary, it had a precursor in "Edison's Phonograph Doll." It was invented by Edison in 1877 and released by the Edison Phonograph Toy Manufacturing Company in 1890. That's 70 years prior to the launch of Chatty Cathy. The technology was pretty similar. Talk about being a visionary.

3To learn more read: "A Cultural History of the Edison Talking Doll Record" by Patrick Feaster.