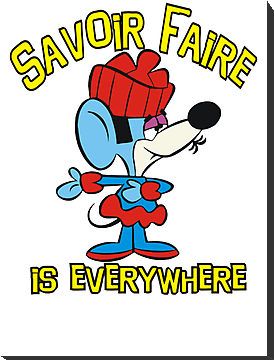 When I decided to do a Top 10 List of Celebrity Mice, I had no ideas there were so many of them. As a result I had to leave out all of the mice from Cinderella and the Secret of NIMH. In addition, I left out some that you may have chosen: Pinky of Pinky and the Brain, Angelina Ballerina and Remy from Ratatouille to name a few. Finally, the Three Blind Mice probably should have made the list but between the blindness and the chopped off tails its a pretty dark story…particularly if you're a mouse.

In doing my research, however, I came across a few characters that are either obscure and / or weird. I thought you might find them interesting.

Were you familiar with Savoir Faire? Me neither. He was a character on the Klondike Kat show (familiar now? me neither). Its a story about a cat Canadian Mounty so it appears that Savoir is a French Canadian mouse. I have to say I do like his look.

What is kind of strange about this cartoon is that it was drawn by Bob Kane, a Batman artist and writer. He meant it as a parody. Based upon the illustration, he should have stuck to Batman.

If I am reading it correctly, Miss Kitty Mouse was a character in The Great Mouse Detective. She is a burlesque singer and dancer and may possibly be a lady of the night. That's some pretty risque stuff for a Disney cartoon.

Ah, yes, Mushmouse. Who??? The Mushmouse that was on the Punkin' Puss & Mushmouse show. Set in the south and featuring the voice of Howard Morris (Ernest T. Bass on the Andy Griffith Show), the cartoon focused on the rivalry between the two lead characters in which Punkin' Puss tried to shoot Mushmouse (they sure don't make cartoons like they used to).

Although created by the incredibly talented cartoonist, Chuck Jones, Sniffles never really became a major character. He was meant to be and he starred in a number of cartoons in the 30's and early 40's. He is a well dressed, mouse, I think we can all agree on that.