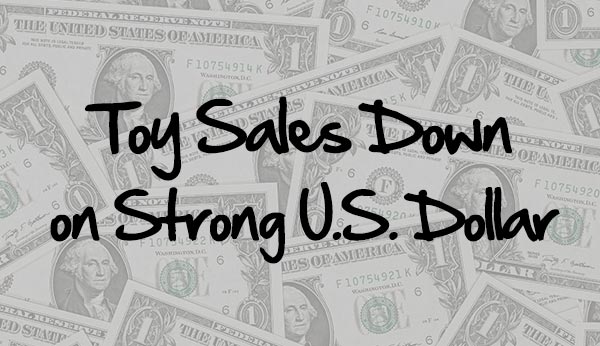 Our latest research published on 6 June has revealed that global retail value sales of traditional toys and games declined by 5% in 2015 in US dollar terms. However, if the impact of appreciating US dollars is removed by looking at the figures in terms of fixed 2015 exchange rate, we see a global market that increased by 6%. This divergence is reflective of a global toys and games market driven by strong sales of licensed and construction toys but plagued by unfavourable macroeconomic conditions across much of the globe.

2014 was a big year for licensing as toys based on Disney’s Frozen franchise drove toy sales. The 2015 release of Star Wars Episode VII overshadowed Frozen becoming the central story in traditional toys and games. While Star Wars was the biggest licensed property globally, the importance of smaller franchises, including properties of regional scale, continued to rise. Growing access to media, with the proliferation of smartphones and affordable internet access, contributed to burgeoning global audiences for entertainment media. This has translated into the ever-increasing popularity of licensed toys globally. With a packed film release schedule over the forecast period, which includes a new Star Wars franchise film every year, we expect to see increasing sales of licensed toys over 2015-2020. This will push more manufacturers to build more significant media ecosystems around their toy brands as Hasbro Inc has done with Transformers and LEGO Group has done with its construction toys.

Construction was once again the fastest growing category globally in 2015, with growth reaching 14% in constant currency terms. Sales grew primarily due to the continued success of LEGO, which had a very successful 2014 after the release of The LEGO Movie and capitalised on the release of Star Wars in 2015. Global retail value sales of LEGO construction toys grew by 16% in constant currency terms in 2015, but the enduring popularity of STEM toys has had a positive impact on sales of LEGO’s competitors as well. Mattel saw continued growth from its recently acquired MEGA Bloks product line, with 12% global sales growth in 2015. With a new LEGO movie due out in 2018 and the continued strong performance of licensed construction toys, we expect construction to remain the best performing category within traditional toys and games through 2020.

The appreciation of the US dollar against other major currencies in 2015 was a key story in the toys and games market. Deteriorating macroeconomic conditions in major emerging markets like Russia and Brazil contributed to slowing growth globally in 2015. Because of economic difficulties in these markets, Eastern Europe and Latin America saw the biggest declines in 2015 in terms of US dollars. Despite financial difficulties affecting emerging markets in 2015 and 2016, they remain highly prospective over the longer term due to favourable demographics, with growing numbers of children and smaller households. This is especially true in China and India, as well as many populous emerging markets across Africa. Therefore, we expect dynamic mid-to-long-term growth in both regions, with retail value CAGRs reaching 6% in Middle East and Africa and 5% in Asia Pacific over 2015-2020.