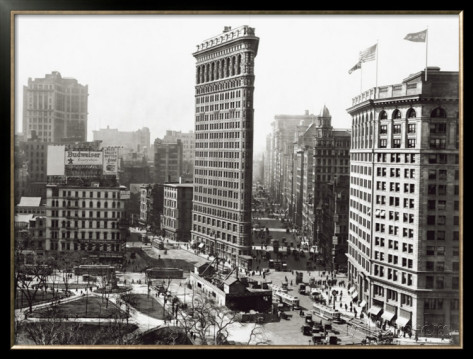 1916 was a big year for music with tunes that are still familiar today. "I Love a Piano", "The Sunshine of Your Smile" and less familiar ones like: "There's a Quaker Down in Quaker Town", "Everybody's Crazy on the Foxtrot" and "► Oh How She Could Yacki Hacki Wicki Wachi Woo (That's Love in Honolulu)."

Today is the 100th anniversary of the founding of the Toy Industry Association (then called the Toy Manufacturers Association). It was June 9, 1916 and on that day a group of men (remember this was 1916) gathered together to formally create a community of interest. An organization that would bring them together professionally and socially and by doing so provide them with a voice in Washington and an ability to accomplish as a group what they could not accomplish as individuals.

When we think about these kinds of moments in history we tend to grant those present with insights and visions that they probably did not have at the moment. They could not have foreseen that what they started would still be in existence or that their industry would be measuring revenue in the billions of dollars.

I would like to take this posting as an opportunity for us to look back to 1916 and feel what it would have been like to have  been there. Were these individuals, separated from us by a century, be very different or would we easily recognize them as "toy industry people?"

Before embarking on this, however, let me take a moment and direct you to an excellent book by "The Toy Guy," Chris Byrne, entitled They Came To Play. It is a well researched and written book that will provide you with the details about what went on that day and the ensuing years.

So who were these people? I don't mean their names but what were they like. Were their lives similar to ours? Would one of us, if we attended that meeting, have found it all somehow familiar?

What brands were popular?

One way to figure that out is to consider how different or not so different was the world in which they lived. For example, what brands did they enjoy in 1916? Well there was no Captain Crunch or Mountain Dew but there was  Coca Cola,Philadelphia Cream Cheese,Campbell's soups  Jell-O, Kellogg's Corn Flakes, Nabisco Animal Crackers, Oreos, Hershey Bars, Heinz Ketchup, and more.

Where did they eat?

Where did they go to eat in New York? A surprising number of restaurants they may well have visited are still in existence and you can, by visiting one of them on your next trip to the city, get a sense of what they experienced at that time. You can try Delmonico's in lower Manhattan, the Grand Central Oyster Bar, Keen's Steak House on 36th Street (if you go there make sure you visit the bar and toast the 100 plus year old painting of the unclad, Miss Keene), Peter Luger, P.J.Clarkes, Katz's Delicatessen and McSorely's.

At what hotels did they stay?

And where did the out of towners stay while in New York?  It is interesting to note that, again,  a number of that hotels at which they may have stayed are still around. You may want to stay or at least enjoy the bar at: The Algonquin (later famous for the Algonquin Round Table), the Iroquois,  the world famous Plaza Hotel the St. Regis and Waldorf Astoria. There was no air conditioning yet (it probably would have been appreciated in June) but they were, even at that time, comfortable and in some cases luxurious places to stay. 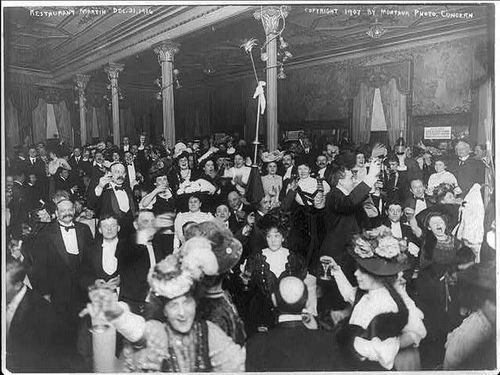 Some familiar faces, don't you think?

To what music did they listen?

And there was music. 1916 was a big year for music with tunes that are still familiar today. "I Love a Piano", "The Sunshine of Your Smile" and less familiar ones like: "There's a Quaker Down in Quaker Town", "Everybody's Crazy on the Foxtrot" and "► Oh How She Could Yacki Hacki Wicki Wachi Woo (That's Love in Honolulu)."

What cars did they drive?

Did some of them drive in to the city? If they did, what did they drive? The Ford was certainly around as was the Chevrolet and Oldsmobile. On the other hand, so was the Pierce-Arrow and the Twombly (yes the Twombly).

What did they eat?

And what did people eat? When they socialized they may have had tea sandwiches, sponge cake, oatmeal cookies, fudge, popcorn balls and jelly beans. What did they drink? Coca Cola, coffee tea and lemonade.

What did they talk about?

My guess is that they were modern "men". They were leaders in relatively new, mass produced, consumer products business. They were living in the age of Progressivism and they lived in a city that had recently installed a subway system. New York's first skyscraper, the Flatiron Building, was to be the organizations home. And by the way, it could be built that hight because it used a girder system, something that their leader, A.C. Gilbert, was to introduce as a toy with his Erector Sets.

What did they worry about?

I have to imagine that they worried about the war in Europe and whether the US would enter; Pancho Villa's cross-border raids from Mexico and whether Teddy Roosevelt would run yet again for President

Bottom line, I really don't think they were very different than us. I have a sense that if we could take a time machine back and walk into that building we would have found the people present to be oddly familiar. They are, in essence, us. What are we creating that will be around 100 years from now?