In my previous blog titled I’d Like to Thank All the Little People, I described the profound impact that Fisher-Price’s Play Family had on my preschool years in the early 1970s. What I could not have realized during those formative years is that, almost 4,000 miles away in Zirndorf, Germany, another type of play set—Playmobil—was being designed and tested for use by four- to 12-year-olds. But by 1977 at the ripe old age of seven, I had transitioned to these more “grown up” Playmobil play sets, and they elevated my imaginary play skills to an entirely new level. 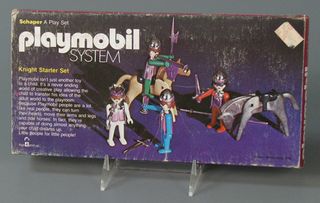 Playmobil play sets and figures were designed by Hans Beck (1929–2009), a German cabinetmaker by trade, who in 1958 became a toy developer at the German toy manufacturer geobra Brandstätter GmbH & Co. Founded in 1876, the company stopped manufacturing metal products in the 1950s and switched to less expensive plastics. With its emphasis on plastic toys, during the 1960s, geobra Brandstätter produced hula hoops for the European toy market.  In 1971 the head of the company, Horst Brandstätter (1933–2015), assigned Beck the task of designing a new line of toy figures. After nearly three years of developing and testing these plastic characters with multiple accessories, Beck displayed his Playmobil play sets at the 1974 International Toy Fair in Nuremberg, Germany. The first three themed play sets issued in 1974 featured knights, Native Americans, and construction workers.

By 1975, Playmobil play sets began selling worldwide; however, they did not enter the U.S. market until 1976 when Schaper Mfg. Co., a toy and game manufacturer in Minneapolis, Minnesota (best known for the game “Cootie”) licensed the product line. That same year, Playmobil introduced a female character figure for the first time and, by 1981, Playmobil had added child figures, too. According to the Playmobil USA website, the average Playmobil figure stands 2.9 inches tall and is the “perfect size for a child’s hand.” To fill all those hands, the company produces 3.2 figures every second at its factory in Spain. Each figure is made up of seven parts: hair, head, torso, inner mechanism, two arms, and a set of legs. But what makes them so appealing? Seven-year-old me was enamored with Playmobil figures and play sets (especially the knights) because of their simple, yet sophisticated design and the abundance of accessories included. I wasn’t just playing with medieval knights with swords, I was playing medieval knights with swords, horses, trumpets, shields, thrones, horses, saddles, tables, plates and goblets. The plethora of accessories allowed me thrive in the land of make-believe. Since the Playmobil figures’ heads and arms moved, I could put items into their hands and mount them on horses; I was able to create an elaborate scenario and immerse myself in another world. It was a story created for myself, by myself. Playmobil has maintained popularity over the last 40 years and has expanded from three play sets to more than 40 that now include pirates, the Stone Age, athletes, treasure hunters, police and fire rescue, school, African wildlife, and Dragon’s Land. Since 1974, Playmobil has created more than 3,995 different people figures, introduced 149 Playmobil animal species introduced, and sold more than 2.7 billion figures worldwide.

Looking back, my transition from Fisher-Price Little People to Playmobil play sets marked the evolution of my style of play. As I grew older, my ability to role play developed in a more sophisticated manner complete with elaborate storylines and that tapped into a deeper understanding of my world at the time. I can still picture the 1977 living room carpet—I mean, my kingdom—arranged with Playmobil sets, and my seven-year-old self planning my next great adventure.