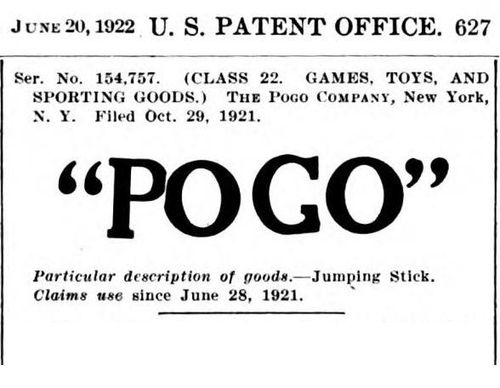 The Pogo Stick is one of those playthings (think stilts or a unicycle) that defy not just my sense of balance but my imagination. Nope, you will never get me on a Pogo Stick. Never-the-less, this piece of 20th century toy engineering, has stayed with us since the 1920's. It is not surprising, when you think about it, that it would have arisen in an era of Flappers, Wing Walkers and Pole Sitters. Those pre-Great Depression crazies  would have found the Pogo Stick with its amplified bounce to be right in their cultural wheelhouse. 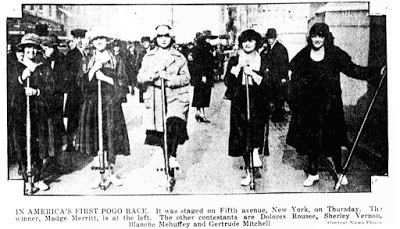 Ziegfeld Girls take to their Pogo Sticks on Fifth Avenue

The modern PoGo Stick was invented in 1920 by two Germans, Max Pohlig and Ernst GottschallIt, and the word Pogo was created  from the first two letters of their respective last names. A craze immediately took off in France and England and an American trademark was granted in 1921.

According to the Guinness Book of World Records: "The longest marathon on a pogo stick is 206,864 bounces, achieved by James Roumeliotis (USA) at Pogopalooza 8 in Costa Mesa, California, USA on 29 July 2011. James bounced for 20 hours and 13 minutes."

According to XPogo, which tracks Pogo Stick records, the highest jump was 10 feet 6 inches accomplished by Bill Hutchison and Dalton Smith.

Above is an original Pogo Stick from 1921. They were made out of wood, pretty elegant really, and in appearance are not that different from the 21st century versions like the Flybar Super Pogo 2 (see below).. The Hula Hoop, the Yo-Yo (also popularized in the 1920's) and the Pogo Stick are important elements of popular culture and toy industry history. Thank you toy inventors and thank you toy industry. You keep us hopping (groooaaaaannnnnn).