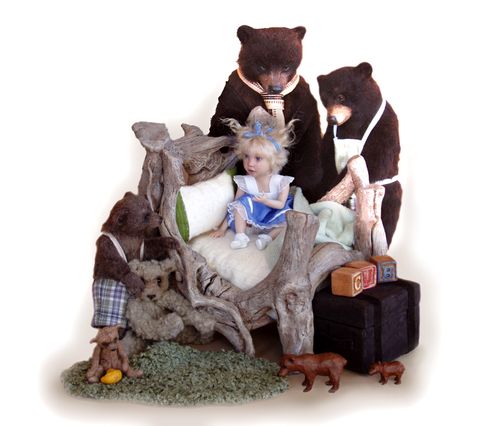 After I wrote my article on Ted the Bear, I began to think about the number of bears in children’s literature, cartoons and movies.  So, I thought it would be fun to do a little research and rank the Top 10 Fictional Bears in history in order of importance.

This bear family which debuted in Goldilocks several hundred years ago is still with us today.  They may just have been the bears that started it all.

Teddy Roosevelt didn’t know what he started when he spared the life of a bear while on a hunting trip.

What did he start; the teddy bear business?

Probably the most recognized bear in the world.

Smokey, based upon an acutal rescued bear,  with his big round hat and shovel is the least warm and fuzzy of the top 10.  He means business though and his business is stomping out forest fires.  Start one and he looks like he may stomp you out.

Brer Bear was the creation of Joel Chandler Harris.  Now largely forgotten, the dim witted bear was a featured character in Disney’s “Song of the South” and still shows up in the occasional character parade at Disney theme parks.

The name was based upon Yogi Berra, the Yankees catcher, but the character was that of a picnic lunch stealing vaudevillian.  This 1960’s Hannah Barberra character, accompanied by Boo Boo Bear, attempted a comeback in a quickly forgotten 2010 movie.

I had the opportunity to spend an afternoon with one of the creators Jan Berenstain(the other being her husband Stan), a few years ago.  She recently passed away but I can still remember her telling me how their editor, Dr. Seuss, was the one who came up with the name Berenstain Bears.

A stowaway bear from Peru, Paddington is found in London’s Paddington station where he is adopted by the Brown family.  He continues to please parents and children as a very polite and warm hearted character.

No, not the Rupert from English artist Mary Tourtel (the English love bears, the British Toy Association even gives out a Golden Bear Award each year) but the Rupert from Family Guy.  He belongs to Stewie, the oddly adult baby with a British accent (and yet another British / Bear connection).

So, let us know what you think of this ranking.  Who did I leave out?  Let me know.