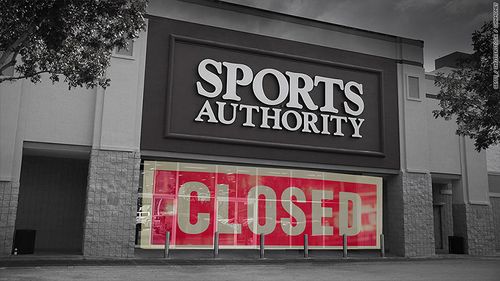 Sports Authority is going away. A chain that was once at the front end of sporting goods retailing will more than likely liquidate its assets as it has been unable to strike a deal with Modell's Sporting Goods. This follows news in April that west coast sporting goods retailer, Sports Chalet, was closing all of its stores and liquidating its assets.

There are a number of reasons that these chains have struggled: Debt was a problem for both chains but I think that something more may be at play. Sporting goods used to be about baseball bats, barbells and hockey sticks. Of course it still is but its also about yoga pants and sports bras.

In other words, women have become increasingly a bigger part of the sporting goods market. The trend in sporting good sales has been up with sales increasing annually since 2009. The difference appears to be that consumers have become splintered in where they purchase.

Here is how Los Angeles Times reporters James F. Peltz and Samantha Masunaga put it in their article: "Why sporting goods retailers are fumbling":

As Americans become more health conscious and fitness focused, the sporting goods industry has grown steadily but also become increasingly specialized. If you want stylish $50 sports bras and $100 yoga pants, you go to Lululemon. Discount sporting equipment? Big 5. Top-notch customer service? REI. Cheap and casual workout clothes with a side of laundry detergent or toilet paper? Target or Wal-Mart will do.

Even mall staples such as Forever 21 and Gap have aggressively expanded their active wear offerings in recent years as they try to capitalize on the so-called athleisure market.

What the writes don't point out and what I find to be of import is that the products cited are all oriented towards females. Is it possible that Sports Chalet and Sports Authority failed to  embrace the female shopper more when they had the chance?  That these chains, Sports Authority traces its origins to 1928 and Sports Chalet to 1959, had a culture that oriented more towards males than females and that when females began to be significant purchasers these chains were just not the place to go.

I think its a cautionary tale for any retailer or manufacturer that insists on maintaining 2oth century gender designations in the age of the Millennial shopper.