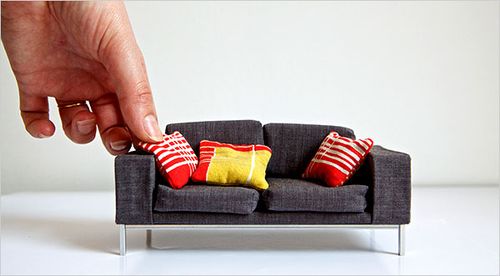 I can remember as a child being mystified by the back of a penny on which someone had written the Lord's Prayer. I was as amazed that someone could as I was curious as to why someone would try to achieve such a feat?

The answer may just be that they, like those who love doll house furniture or miniature toy soldiers, are "Miniacs." The term is new to me and I just discovered it this morning in a New York Times article by Abby Ellin entitled "Miniacs Live in a Small, Small World." It is a self-descriptive term used by those who create for or play in this world of the very small. 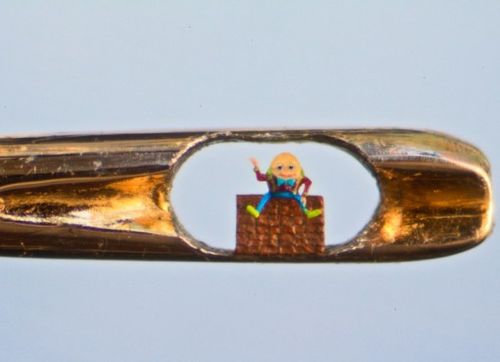 Humpty Dumpty Sits Inside the Eye of a Needle

Rich adult nobility, not children, were the first to play with doll houses. H.G. Wells and Winston Churchill loved their toy soldiers. They collected and played with them. How popular are miniatures now? Well, to give you an idea, Etsy features over 400,000 of these tiny items.

Why do we love miniature versions of real world objects? Is it, as the article implies, a way to achieve a sense of control over an out of control world; is it a way to have in miniature what we cannot have in real life; is it a form of art, a hobby or a passion?

Or is it that w would like to be able to inhabit a world we build? There used to be a comic book series about a little girl who through some magic words make her self the size of a mouse. The title of the series was "Mary Jane and Sniffles" (Sniffles was the mouse) and I can still remember one of the stories in which they were able to walk around in a sand castle that someone had made and left on the beach. At that time I was playing a lot with miniature toy forts  and I loved the idea of being able to get in there with them.

For me, miniatures are a vehicle for fantasy and creativity. But whatever they represent for you or those who make them, they seem to represent some basic human need. We are all, I suppose, to some degree miniacs.