As I explore in our "Key Character Licensing Trends Shaping Apparel, Personal Accessories and toys in Asia Pacific" Global Briefing, Asia Pacific is a promising region where growing populations, rising disposable incomes,expanding middle classes and rapid urbanisation are all driving growth in licensed products sales. Apparel, accessories and toys are the top three most licensed industries. The region is home to the world's biggest apparel and accessories markets while being the most dynamic toys market. Although character licensing is dominated by Japanese properties, international franchises have been gaining popularity seizing the opportunities the region offers. 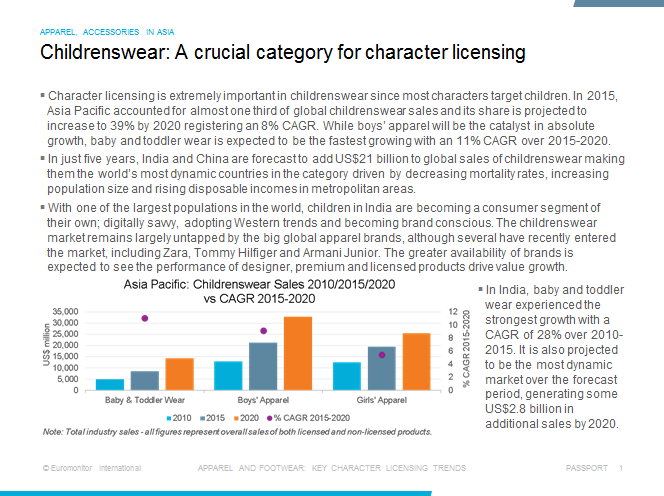 Asia Pacific: Size of the prize

Apparel and footwear, personal accessories and toys are the top three most licensed industries in Asia Pacific. It is the world's biggest apparel and accessories market, while the region is the world's fastest-growing toys market with 5% CAGR projected over the next five years.

Asia Pacific is home to more than half of the world's population with the best middle-class expansion potential in the region. Rising disposable incomes and rapid urbanisation are fuelling the growth in licensing.

Childrenswear is a crucial category since most characters target children and the region is home to two of the world's largest child populations, China and India. Japan-based Uniqlo has been one of the most dynamic companies expanding its children's characterwear range in recent years.

Backpacks, followed by cross-body bags, is the most heavily licensed category in accessories. In overall category sales, however, jewellery is by far the largest category. Hong Kong-based Chow Tai Fook is the most predominant company in character licensed jewellery in the region.

Half of the world's top 10 most heavily licensed toys markets are in Asia Pacific. South Korea, Indonesia and Singapore  are the top three countries in terms of licensing penetration, with more than 40% of toys licensed.

Through its manga series, Japan has a huge impact on character licensing across Asia Pacific. With the exception of Yo-Kai Watch, most of these are long-established franchises making the region exceptionally challenging for international properties to penetrate and expand.