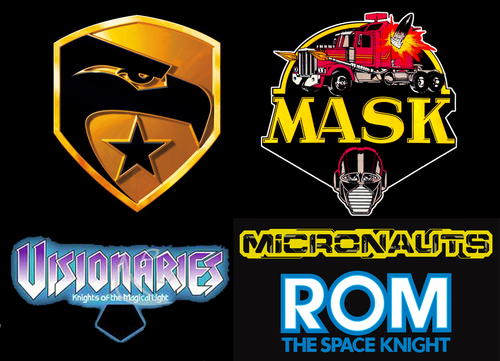 Hasbro, in what can only be described as an audacious move, is grouping GI Joe with four lesser known franchises to create its own movie universe. The company is putting together a star studded group of writers whose job it will be to create an interconnected group of films out of some unlikely parts. Its a big vision and a big bet.  It is going to be a lot of fun to see how all of this plays out.

Marvel and DC, of course, have long led the way in terms of creating fictional universes out of a mix of characters and comics. Hasbro is following suit by working with Paramount Studios to produce a series of interconnected films featuring Rom, Micronauts, M.A.S.K., GI Joe and Visionaries. Yes, I said Rom, Micronauts, M.A.S.K and Visionaries and, if you are under 30 years old, you may not have heard of any of them.

I find Hasbro's act of mixing top flight writers with lesser known brands to be so interesting that I want to consider it in two parts: The Writers and The Brands.

According to a GQ article by Joshua Rivera, "Are You Ready for Another Cinematic Universe…Based On Hasbro Toys," the writers include:

Pulitzer-winning novelist Michael Chabon (who also worked onSpider-Man 2), award-winning comic book writer Brian K. Vaughan (who worked on shows likeLost and Under the Dome), Guardians of the Galaxy co-writer Nicole Perlman, and Joe Robert Cole, a writer on The People v O.J. Simpson and Marvel's forthcoming Black Panther. The team will be overseen by Akiva Goldsman of A Beautiful Mind fame…

Frankly, they had me at Michael Chabon, the author of The Amazing Adventures of Kavalier & Clay, Wonder Boys and The Yiddish Policemen's Union which won a Hugo Award. He has also won a Pulitzer, a Faulkner and numerous other awards. He is one serious writer. Put the rest of these pro's together and you have a writer's version of Babe Ruth and the 1927 Yankees.

This  extremely impressive lineup shows Hasbro and Paramount's strong commitment to this new movie franchise. But what do they have to work with?  That in my next posting…