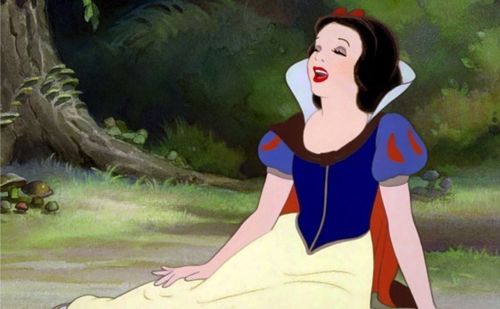 The percentage of female voices fell to a low of 10% in Aladdin.

The Disney Princess films, dating back to the premier of Snow White in 1937, have played an outsized role in American culture. The common wisdom is that, as the years have gone by, the Princess movies have progressively changed to fit with a world that is open to strong female characters, who speak up and who take action.

That was why many were surprised by a study conducted by two linguists, Carmen Fought and Karen Eisenhauer, that found that the newer the Princess movie the more that male voices predominated. Here is a graph depicting the percentage of time that a female spoke in the movie*: 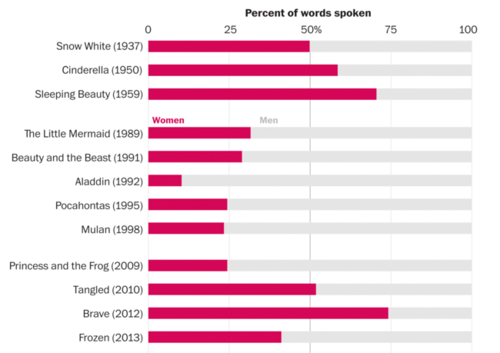 As you cans see, the first Disney movies (1937 – 1959) were dominated by female voices. A funny thing happened, however, when Disney began making new Princess movies in the 80's and 90's, the percentage of female voices fell to as low as 10% in Aladdin. Recently, that pattern has reversed but even in Frozen which features two sisters, females speak only 41% of the time.

How does this happen? Here is what I think; most societies default to a male oriented perspective. There is no conscious intent, it's just a pervasive world view. Here is how Geena Davis, actress and founder of the Geena Davis Institute on Gender in Media" put it in a Hollywood Reporter article: "…for every one female-speaking character in family-rated films (G, PG and PG-13), there are roughly three male characters; that crowd and group scenes in these films — live-action and animated — contain only 17 percent female characters…"

I found a similar situation for the toy industry when in 2011 I did a gender review of the major retailer Christmas toy catalogs. I found that the Sears catalog featured boys in 83% of the pictures. Kmart featured boys 64 % of the time, Walmart 63% and Target 62%. Toys R Us featured boys only 53% which was pretty close to parity. If we drop out the extremes, Sears and Toys R Us, we find that 63%, close to 2/3's of all children depicted were male.

Bottom line, it appears that our cultural awareness has less of an impact on our subliminal behavior than we think. Whether its the movies or toys, we do seem to short change girls in the pop culture we consume.