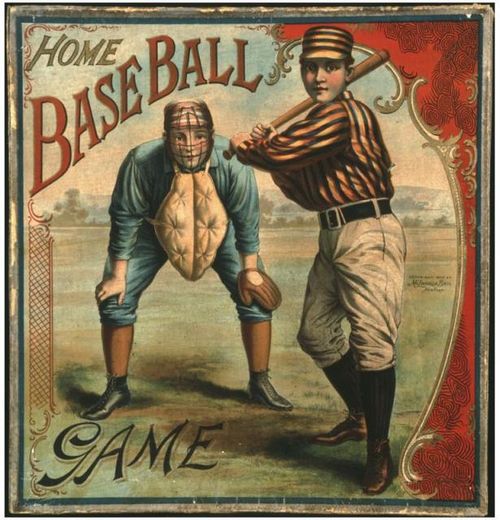 Baseball season is here (thank God) and with it the promise of slower, warmer days.  What is it about baseball that captured the attention of table top board games almost from the beginning? There were almost 75 table top baseball games published between 1860 1899.

In fact, there were table top Baseball games on the market as early as 1868 ("Sebring's Parlor Baseball"). That's only 29 years after Abner Doubleday theoretically invented the game in a Cooperstown cow pasture belonging to Elihu Phinney.

To put those dates in perspective, the notion of playing 9 innings became an official rule of the game in 1872 and the National League was formed in 1876. In 1889 the number of strikes was reduced to three from four. In fact, the modern era of baseball is considered to have begun in 1901, after the creation of the American League.  It appears, therefore, that the game played on a table and the game played on a field evolved together. 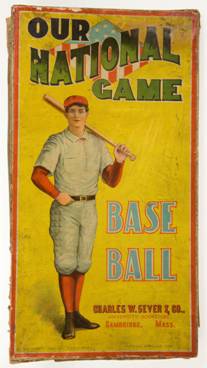 Baseball is personal (I am a Cardinals fan) so let me tell you my table top baseball game moment.  I once worked for a company, Cadaco, that produced "Ethan Allen's All Star Baseball."  Cadaco acquired the rights in 1941 and it stayed in the company's line-up into the 1990's.

I can remember one of the staff spending time each year updating the discs that contained the prior year's player statistics.  I can also remember the creator, Ethan Allen, then quite old, sending us a photograph of him when he was the baseball coach at Yale. Standing with him were Babe Ruth, who was visiting the team, and the captain, a young George W. Bush, then an outstanding first baseman for the Bulldogs.

As I held the picture in my hand, all I could think was:  "Why is this not in the Smithsonian?" "What if I spill coffee on it?" and "Let's send this back to Ethan Allen, NOW!"

But, I digress as this is an appreciation of our desire to replicate the outdoor game on the indoor kitchen table. I found a great website that is devoted to these games called, appropriately, "Baseball Games." It actually lists every talbe top baseball game ever published.  There are literally hundreds of them listed running from "Abbott and Costello's Who's On First" (Selchow & Righter 1978) to Zondine Baseball Cards (Zondine, 1940's). A review of the list proved to be both relaxing and interesting, much the way I and many people experience the game itself.  (After all, you spend most of your time sitting forward at a basketball game while you sit back at a baseball game, a beer in one hand and a hot dog in the other.)

In my next posting I will list some of the surprises I found as well as some more pictures.