As smartphones and tablets became mainstream over 2011-2013, they started to infringe on the desire for family game time, resulting in a 3% decline in global retail sales of games and puzzles in US$ constant value terms. However, due to targeted updates of older brands, as well as new product entries aimed at families, combined with the continued growth of niche board games that appeal to millennial consumers, the global outlook for games and puzzles for 2016 is one of the brightest in years. 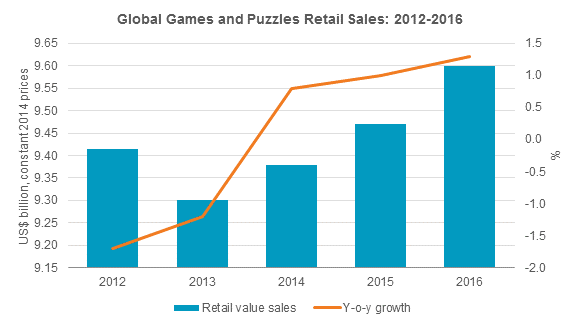 Hasbro owns many of the iconic brands within the board game category, such as Monopoly, Scrabble, and Clue, and was by far the largest games and puzzles company globally in 2014, with a 20% value share of the category . While its core brands were a soft point of sale from 2011 to 2013, exhibiting low to declining growth, recent   reports from the company show that the brands have been gaining in sales, in part   due to additions made to these brands' portfolios. Licensing has been a core part of additions, with products like Jenga: Disney Frozen edition, as well as various versions of classic board games featuring new Star Wars characters, released in the last year. In addition, the company has taken strides to make games like Monopoly appear more modern, with the Monopoly Here and Now edition and the recent unveiling of Monopoly Ultimate Banking, which does not use paper money and allows prices to fluctuate  during the game. Besides classic brands, new introductions to Hasbro's product  portfolio, such as the release of Pie Face Game, have helped to bolster sales.

The millennial board game demographic

While mass-market classic board games and new family-oriented games are seeing modest increases in sales, independent board games continues to be one of the  highest growth areas of games and puzzles. New games are being introduced every year that are largely aimed at millennial consumers, such as Codename, Star Wars: Armada, and Pandemic: Legacy in 2015. These games can be either competitive or cooperative and are typically aimed at adults looking for an activity to do while  drinking and socialising with friends. These new games are joined by successful older independent board games like King of Tokyo and Ticket to Ride, which have grown  from their roots of specialty hobby shops or comic book stores and are now mainstays at mass-market retailers like Target and Wal-mart. Additionally, some independent games are crossing over into new geographic territories, as Asmodee Group's acquisition of Days of Wonder and Fantasy Flight Games in 2014 means some of the  top independent US board games now have an entry point into European markets, where Asmodee has a strong distribution  network.

The renewed strength in classic board games, as well as the introduction of mass- market, family-friendly board games, is creating positive momentum for board game sales. Combined with the continued growth of independent board games aimed at adults, games and puzzles is likely to see some of its strongest sales growth in years in 2016, with value sales expected to grow by over 1% globally in US$ constant  prices.