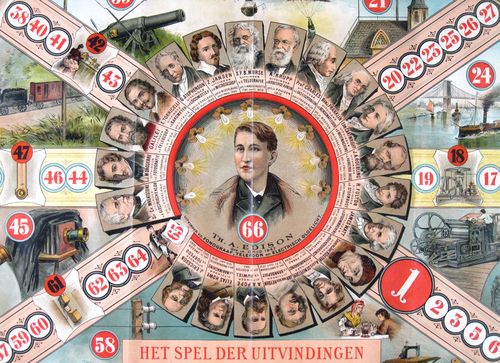 We received a lot of responses to my earlier article, "A Visit to an Exhibition of American Board Games; what I saw".  In that article I wrote about a wonderful exhibit of antique games I had seen at New York's Grolier Club. It was an exceptionally rare grouping of games from 400 years ago through the 1950's.  Here are some more of the games that were exhibited:

"The Game of Invention" (seen above) is a German game involving the great inventors of the 19th century. I was surprised to see how many of the inventors, including Edison who is featured, were American. The U.S. was a hot bed of 19th century inventing and it was a gracious German inventor who had no problem highlighting that fact. 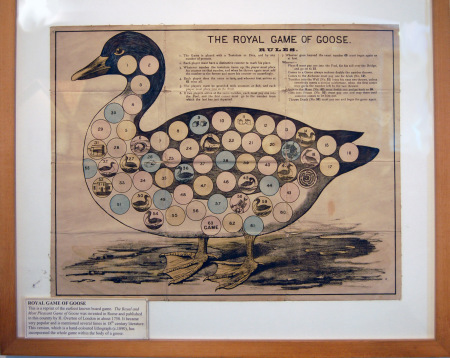 The Royal Game of Goose

The Exhibition was heavy with variations on the game of goose.  The Game of Goose was a very early board game and its use of a sinuous movement pattern was a template for myriads of later game boards.  It must have been one hell of a hit because the collection featured games several Goose games that were billed as "new and improved".   There was also a royal version (see above).  You always wanted to keep the King and Queen happy. 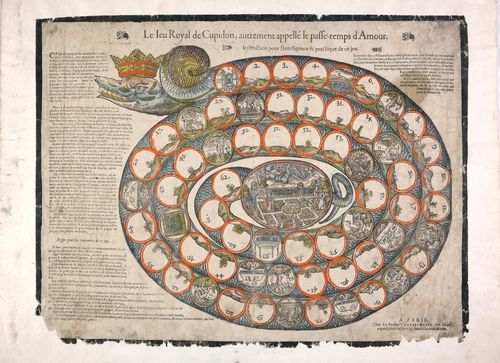 "The Royal Game of Cupid" makes use of a snake as a pathway for this game about love.  It probably tells us something about how people at that time, or at least this game's creator, felt about the subject.  Freud might have had a field day had he been born 200 years earlier but more than likely, a snake was used because its sinewy body was an excellent route for a winding path. This intriguing looking "Mother Goose and the Golden Egg Game" was published in London in 1808.  Its a visually nice looking game and the board looks pretty simple.