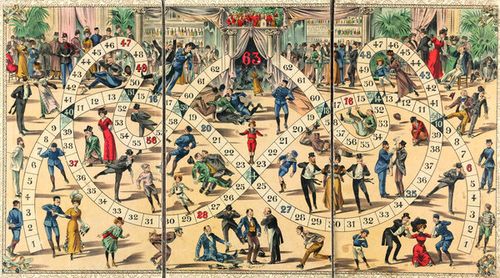 There is a wonderful exhibition of extremely rare antique games taking place in New York City at the Grolier Club.  It will run through May 16, 2016.  The exhibition, entitled "The Royal Game Of The Goose", consists of 70 games from the collection of curator, Adrian Seveille. How rare are these games; they are so rare that despite my Google searches, many images are unavailable.

The first thing that struck me was that though some of the games were 400 years old they are really not that different than modern board games; you can definitely see a family resemblance.  The next thing I found was that the games gave me an insight on what the public mood or interest was at a given time. 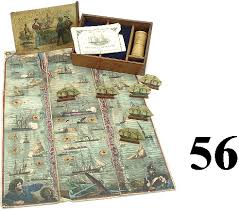 "The Great Blockade" (the 56 is an auction lot number)

"The Great Blockade", for example, was a British game that was published during the American Civil War. During the first years of the war, England and the U.S. were at odds over Britain's relationship with the Confederacy.  England depended on the Southern states to provide them with most of their cotton so laborers in the many textile mills were impacted.  The game, therefore, revolves around British ships attempting to break the U.S. blockade of Southern ports.

"The Game of Invention", published in 1890, allowed players to begin at the start of the 19th century and move forward through a snake like maze of circles containing the various inventions of the 19th century.  The game reflected great pride in that century's accomplishments and ended with an aspirational scene in the year 1899 in which a sign indicated that one could fly to Marseille in five minutes. Unfortunately, no image is available. 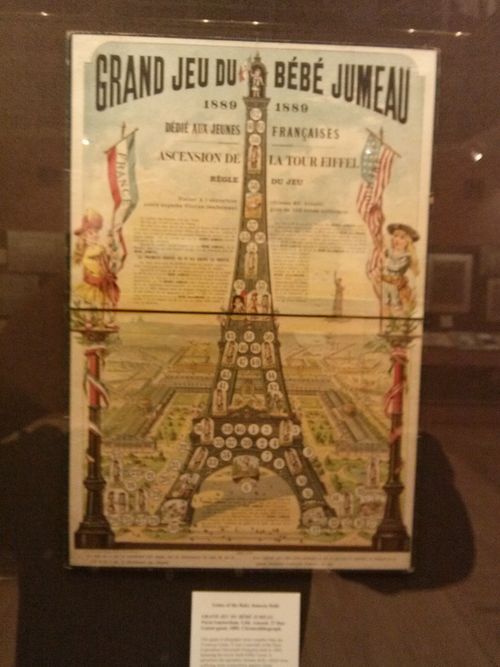 Those who worry about cheaper, foreign made goods may feel a sense of affinity with a game whose mission was to promote the sale of French made dolls, "Grand Jeu du Bebe Jumeau".  It appears that less expensive German made dolls were showing up on the French market.  Produced by the maker of the Baby Jumeau dolls,  in honor of the opening of the Eiffel Tower, the game showed various images of French made dolls.  One of the circles that sent a player back to start showed a broken German made doll; a not so subtle cue to shoppers. 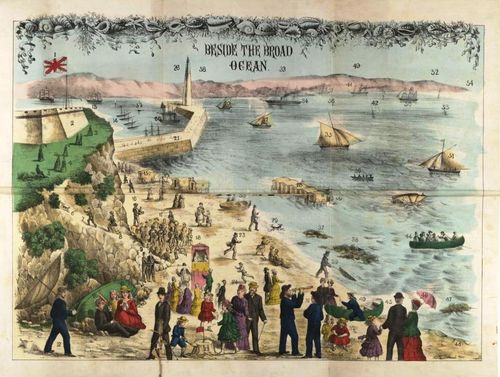 "Beside the Great Ocean"

"Beside the Great Ocean" gave me a sense of what going to the British seaside was like in the late 19th century.  No one appears to be in the water much less wearing a bathing suit.  But upon closer inspection it is possible to see little cabins on wheels sitting in the water.  These contrivances allowed people to enjoy the ocean without being seen in what may have been something too skimpy for those times. The works of Haratio Alger were extremely popular at the end of the 19th century in their stories of boys who go from rags to riches.  "Errand Boy" appears to be a gaming example of that genre.

What I think most impressed me about the collection of games on view was how much they are a reflection of popular culture in much the same way that books, music, movies and video games are today.  With their vivid illustrations, they give us a peek into how people amused, educated and exercised their minds while sitting at the table with friends and family.  If you can make it, I strongly suggest you pay a visit to the Grolier Club.