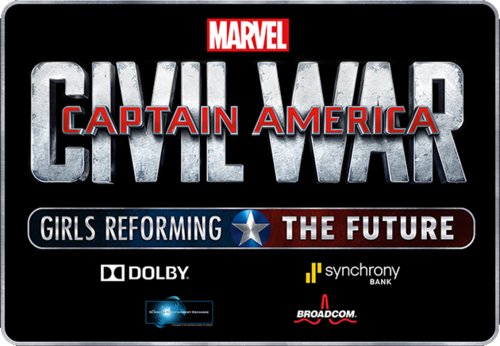 Marvel Studios and the National Academy of Sciences’ Science & Entertainment are putting on a contest to get girls more engaged with STEM and the hard sciences.  Called the Captain America Challenge, the contest is aimed at girls 8 to 15 and in grades 10 through 12 (that has to be one mighty precocious 8 year old) with prizes that include a trip to the Captain America Civil War premiere and a writing internship at Marvel.

I think it is noteworthy that Marvel is using a testosterone fueled movie like Captain America Civil War to promote to girls.  It shows that Marvel assumes that girls, as much as boys, are fascinated by action movies. I think it also shows a willingness to lead on issues of gender that should be inspiring to all of us who are the business of creating play for girls and boys. Good for Marvel and the National Academy of Sciences for making the effort to expose the potential in all children, no matter what their gender.