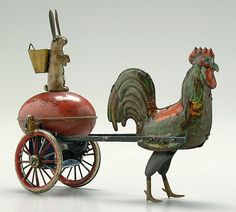 The toy industry, as well as many ordinary people (you know who you are) have long had a love affair with chickens. No, not a love of eating them which, though not universal, is pretty wide spread.  The love I speak of is one that finds a fondness for the sheer silliness (think Chicken Little and Henny Penny); their lovable eyes and wings not to  mention the awkwardness of their feathery strut.  And the beak…yes the beak too. 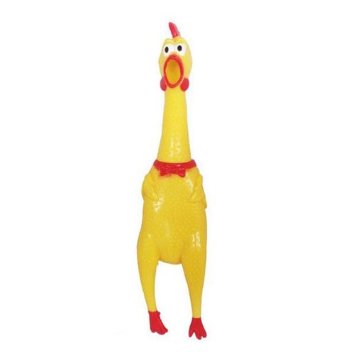 I decided to take a look at three of the toys for which the chicken has been the muse.  One that has always delighted me is the rubber chicken. According to my research, its origins could date back to pre-history (think funny caveman with a pig bladder).  It lives on as an archetypal prop for comedians and the rest of us.

Although there is  no patent, there are apparently quality differences.  I found a quote in an article by Andy Wright in Modern Farmer  entitled: "Farm Pop: Why the Rubber Chicken?"  Mr. Wright has approached Jim Rose the  president of novelty company, Loftus International, for insight on the rubber chicken.

Rose says they’ve (Loftus International) been making rubber chickens since the early 1960s…The company sells between 10 and 20 thousand annually. He does have an idea of why their rubber chicken is one of the most (if no tthe most) popular on the market.  Loftus International has always stressed with its manufacturers that the chicken should be soft and pliable. A Loftus chicken can be tied in a knot. They carefully calibrate the yellowness of the body and the red of the comb… “Ours is warm and inviting,” he says.

Keep this in mind the next time you shop for a rubber chicken. 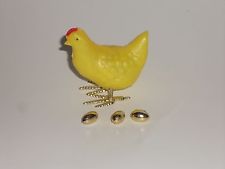 Easter is approaching and it is only appropriate to give a shout out to TAGIE award winner and Toy Industry Hall of Fame member Eddie Goldfarb, the inventor of the "Busy Biddy" egg laying chicken.  Many a child had the joyful experience of pushing down on a small plastic chicken and when letting back up finding an egg. Goldfarb is the toy industry's Edison having invented "Chattering Teeth" and "Milky the Cow".  What they all have in common is a surprise and laughter. Do you have a favorite toy chicken?  If so, let us know.