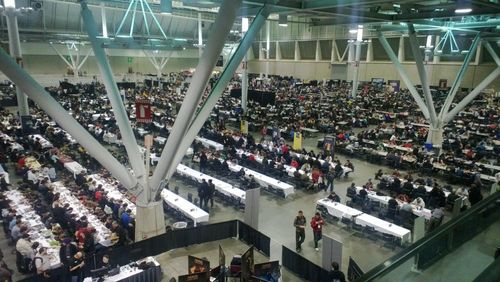 Matt Morgan is a freelance writer covering the tabletop gaming industry, having worked with Wired, MTV, and The Escapist. His commentary can be found on Twitter at @MattMorganMDP

As the board game sector grows in line with surging demand, publishers are exploring ways to win the marketing game. Conventions are a staple of this marketing strategy, but as the convention circuit experiences its own growth, a new problem emerges: deciding which ones to attend, and which to forego. According to pop culture watchdogs ICv2, conventions have been experiencing double-digit growth close to a decade, and the content has shifted dramatically  from “dealers’ rooms” to brand exhibits. It is clearly time to jump in, but how does one know where to start?

The key to the convention circuit is reaching a diverse audience by hitting both ends of the market spectrum. Every time a publisher registers a booth, it should be targeting either the early adopters or the fresh blood of the industry. Over the past year, I’ve had the opportunity to volunteer for two conventions that fit those end-of-spectrum descriptions: BoardGameGeek Con (BGG.CON) and Penny Arcade Expo (PAX), and get a closer look at how they operate.

Every eyeball matters at BGG.CON, which is hosted by the hobby’s premier website, BoardGameGeek.com. Held twice annually in Dallas, BGG.CON is miniscule in comparison to a trade show. However, it has become a must-attend event for industry insiders who know that each of the nearly 3,000 attendees is a brand evangelist. An on-site “hot games” poll is displayed prominently on the website’s front page, ensuring that BGG.CON will set the discussion in forums and on social media for months to come.

Penny Arcade Expo, on the opposite end of the spectrum, contains an audience unlike any other board game-oriented convention. With over 70,000 attendees (3-day turnstile count) and annual events in Seattle, Boston, San Antonio, and even Melbourne, Australia, PAX rose quickly from humble beginnings as a computer gaming festival over a decade ago. With increased awareness of tabletop gaming, PAX has been a leading onramp for video game players to pick up a board gaming hobby, allowing board game publishers a crack at the >$90B annual digital gaming industry’s clientele.

Now, as open tabletop gaming spaces begin to dwarf those allocated to playing video games, and with the addition of a PAX-sponsored Indie Tabletop Showcase , PAX has become one of the board game industry’s best secrets. For instance, at the recent PAX South event in San Antonio, independent publisher Formal Ferret Games had a breakout hit on hand in party game Bad Medicine, where attendees not only cleared out the booth’s stock , but hopped online and emptied Amazon’s inventory right from the show floor.

Early adopters are a key factor to drive awareness, but do not depend solely on them to trickle down their recommendations and spur demand for a board game. They instead drive awareness, which is recalled by the consumers when they encounter a new product (spurring them to take a closer look). Following this formula ensures that new early adopters are being created every day, allowing board game publishers to capitalize on the industry’s rapid expansion.