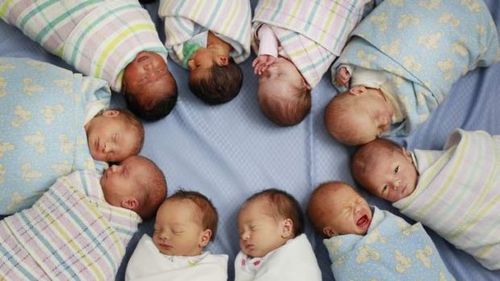 A startling BBC headline caught my eye and pushed me to think about births as a leading indicator of toy sales.  Here is the headline:  "Japan Population Shrinks by One Million Census Confirms." That is a population drop that occurred just since the last census in 2010.

Japan has hit an inflection point in which instead of producing more babies that in turn have more babies, they are producing less babies who will in turn have less babies.  What does that mean?  Well by 2060, 40% of the population will be over 65.  What else does it mean, well among more important things, that you can expect a continuing decline in toy sales to Japanese children.

Unlike Japan, the U.S. has not experienced a population drop but it did see a decline in births from 2007 through 2013.   Most think that the Great recession was the culprit as college graduates in heavy debt and no jobs were postponing family formation.  Here are statistics for 2006 through 2014*:

It is interesting to note that the Great Recession hit in 2007 and we can see its impact begin almost immediately and ran until 2014.  If you will notice, the last few years have seen a decline in toy sales. I will give you some time to digest these figures and come back to you with some thoughts with what to do with them in my next posting.

*Source – Center for Disease Control, statistics not available for 2015