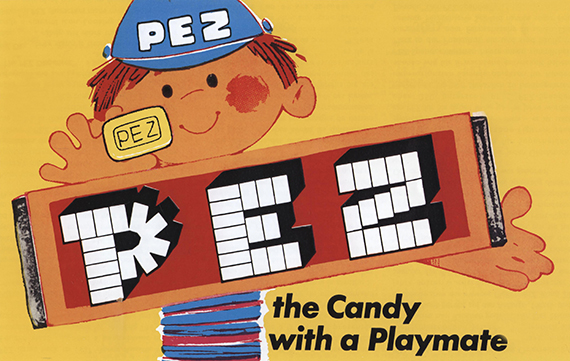 It is no question that candy and toys are among many children’s favorite things. So when the two are paired together, the result is bound to be a success. Coined “the candy with a playmate,” PEZ dispensers prove what a great combination candy and a toy can be.

In 1927, Eduard Haas III of Austria introduced what some argue to be first breath mint. He called his mints PEZ, an abbreviation of the German word pfefferminz, the peppermint flavoring he used in his recipe. Strongly against smoking, Haas advertised the mints as a substitute for cigarettes and packaged them in simple tin boxes. It wasn’t until the 1950s, after failed attempts to market them in the United States, that the company decided to reformulate the candy to fruit flavors and redesign their container.

By attaching a popular cartoon character to the container's lid, PEZ found that children instantly gravitated toward the new design. But we all know it didn’t stop there. Over the years, the company continued to enlist popular characters of the time to retain the interest of children and adults alike. From movie stars to superheroes, PEZ has done it all. To keep up with its products’ growing popularity in the United States, the company opened a factory in the U.S. in 1973. Fast-forward to present day—the Orange, Connecticut plant has doubled in size and operates 24 hours a day to meet the demand. The PEZ factory produces hundreds of different character dispensers simultaneously and consumes 17 tons of sugar each day to produce the candy that goes inside.

But PEZ candies and their dispensers are not just for children. The market has grown continuously in response to the adult collectors who also found the fun in the products. In 1991, the first national convention for PEZ collectors was held in Mentor, Ohio. Today, regional conventions are commonplace and draw large crowds of collectors. Some personal collections range from a few hundred to more than 10,000, proving that PEZ is both timeless and ageless!

Whether PEZ brings back the nostalgia of your childhood or whether you still collect and enjoy them today, the appealing character containers in all their variety offer a lot to appreciate. Want to see for yourself? The Strong has an array of dispensers and related merchandise on display in Perfectly PEZ on the museum’s first floor through April 4.