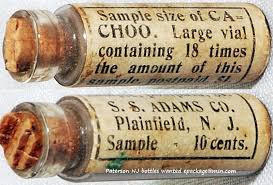 If you have ever been fooled by a Joy Buzzer, the Whoopee Cushion, the Stink Bomb, the Dribble Glass or Itching Powder you can thank Soren Sorensen Adams and his S.S. Adams Co. for the laughter and / or embarrassment.  Starting in 1904 with his invention of CaChoo sneezing powder and eventually operating out of a factory in Neptune, NJ, Adams pumped out a series of practical joke toys that are still with us today.

I can remember my first experiences with Adams novelties.  At the age of 5 my next door neighbor Larry handed me a can of peanuts.  It did not, of course, contain peanuts but a long, spring snake that came flying out and scaring the crap out of me.  I will someday get even with Larry for that trick…it's not over Larry.

Over the years, I have been revolted by Fake Vomit and had my thumb snapped by Snap Gum.  I have never, however, been afflicted by sneezing or itching powder……….yet.  Do you have memories of ever having perpetrated or been the butt of a "joke" using an Adams Company novelty?  If so, let us know.  In the meantime, enjoy these images:

I always felt like Joy Buzzer ads dramatically over promised. I have never seen anyone rise up off the floor. Typically the response is an appearance of mild irritation and a look that says "You, sir, are an idiot." 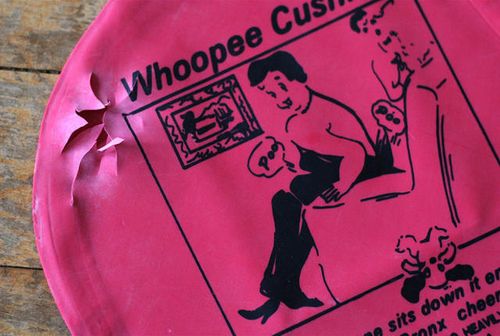 A Whoppee Cushion with an early use of the term "Poo". I have never actually seen a Whoopee Cushion in action; have you? You had to be pretty serious about being a "Joker" to own a "Life of the Party Kit.  In fact, you can still be a life of the party because the S.S. Adams Co, now owned by Magic Makers, is still operating. Now where did I leave my itching powder?