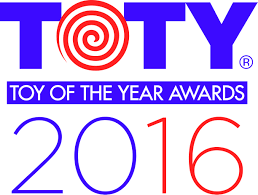 Who assigned the toy industry the responsibility of telling boys and girls with which toys they are allowed to play?

Why does the toy industry willingly lose sales by designating its products as off limits to whole gender categories?

There has been some excitement in the press recently about the toy industry's Toy of the Year awards and its designation of a "Best Boys' Toy" and a "Best Girls' Toy" category. It seems that Washington writer, Rebecca Hains (see "Boys play with dolls, and girls play with spaceships. Someone tell the toy makers") took umbrage at those designations and took the industry to task for them. As Hains puts it: "At the prestigious Toy of the Year Awards Friday evening, honors in two categories — the “Boy Toy of the Year” and the “Girl Toy of the Year” — will rely upon and reinforce the outdated gender stereotyping of toys."

The toy industry responded at the event by stating that the association was reviewing the practice of gender based awards.  Still, not everyone is on board with doing away with classifications that are seen by some as natural gender categories.

I am not new to this discussion, in fact I am very much on board with doing away with gender classifications for the awards ceremonies.  As I wrote in November of last year in my article, "The TOTY Awards; Is it Time to End Boy and Girl Toy Categories?", the notion of assigning toys to a specific gender category seems oddly out of place in a 21st century marketplace.

Here are my thoughts:

Who assigned the toy industry the responsibility of telling boys and girls with which toys they are allowed to play?  Is it really our job to divide boys and girls into two categories and arbitrarily decide what toy fits where? For example, who decided that Star Wars (two nominations under the Boys' category and none under Girls') is a boy's toy?

Why does the toy industry willingly lose sales by designating its products as off limits to whole gender categories?  How many sales are missed and for what purpose?

Why do some consumers express concerns that without categories they would not know what to buy?  I mean, any person who knows so little about their child or grandchild that they have to have the toy industry tell them what is appropriate needs more help than we can provide.

I think its time for the toy industry to go gender neutral.  What do you think?