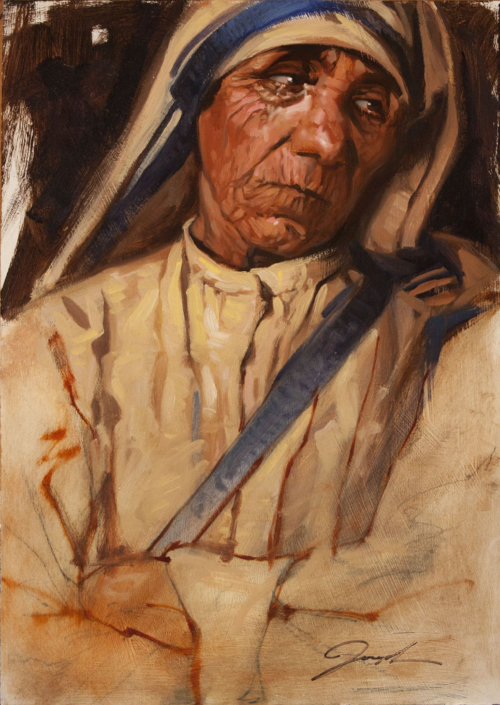 So, back in the day before my comb over, I was watching a late night news program covering a very important person who happened to pass by Mother Theresa as the press covered him visiting an impoverished community.

It took several minutes to even say his title let alone give a brief bio of his many career accomplishments, but after this great dignitary was done talking about himself, one of the reporters tapped Theresa on the shoulder to give her the opportunity to meet him.

The old lady looked up and waved for the dignitary to join her, then abruptly went about her business, tending to a sick man lying on a mat outside of a makeshift medical hut. She was surrounded by so many others lying on the ground, waiting for a cool drink of water as she made her rounds one by one in the scorching heat.

Continuing to wipe the flies off the poor man’s face, she gently kissed his cheek and combed his hair with her wrinkled hands. Unlike the dignitary, this man was insignificant in worldly terms—ugly and diseased, yet she knelt down in the dirt to be by his side as though she were attending a king.

The reporter tapped her on the shoulder again to try to explain, more slowly, that she was missing the opportunity of meeting such a significant man, but she just waved once again for the dignitary to join her as she continued to wipe the flies away.

Perhaps, at her old age, Theresa failed to grasp the importance of such an event, missing the golden opportunity others would have killed for just to have a couple of minutes of global television coverage—all because she was too busy swatting flies. Yes, a simple task to be sure, but one of great significance if you just so happen to be the one lying on the dirt slowly dying as flies nip your face.

After a commercial break, the interview continued with the dignitary in a very ornate office, speaking, of course, about the need to reach out to the poor, who, by the way, were at this point a safe distance away.

Years later, I can’t remember that dignitary's name. What I do remember is the diminutive lady in the background who was too busy for the cameras, choosing instead to focus on what mattered most of all.

The greatest people I have ever known are those who reach past the ordinary to touch the extraordinary. They do not conform to the logic of this world, but choose instead to focus on what really matters—the truly significant.

What in the world does any of this have to do with toy ideation and advancing your personal position within this industry? Well, concept art and ideation sketches must have the same laser like focus in terms of choosing what is truly important to focus your efforts on.

To create the most impactful image possible, only use the ordinary structural elements to build your composition and make sure they all point toward the truly significant focal point—the big idea—to capture the interest of the viewer.

The oil painting posted here was a quick sketch I did just for myself, to experiment in capturing emotional impact with very little detail or fancy illustrative techniques. I actually sketched this on an old piece of plywood I had discarded in my cluttered garage.

Yes, the painting certainly could have been more polished, but that would have lost the raw power of the focal point—a very special lady who saw past the ordinary to truly see the extraordinary. Her name I will always remember.

So, keep your sketches simple, impactful and straight to the point. Carefully edit the ordinary information to clearly convey the most significant point of your ideation, and your work will not only become more focused and relevant—but truly extraordinary.

Special shout out to all of the design students at Columbia College in Chi Town—keep up the great work!!!