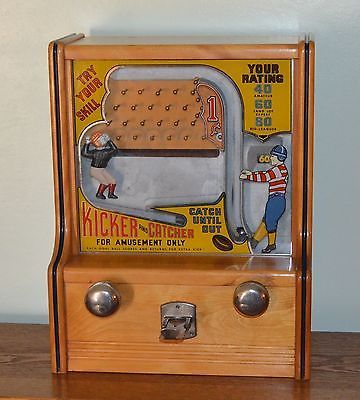 The Super Bowl is once again about to encroach on our consciousness.  Amongst the hundreds of millions of chicken wings and gallons of beer about to be devoured will be fond memories of football games past. Perhaps, while enjoying the show, we may want to give a nod to some of those wonderful table top and arcade versions of the past that were in some ways the precursor of Fantasy Football that is so popular today. 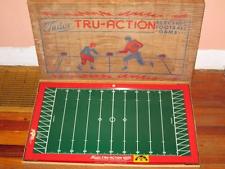 Easily, the best gift I ever received as a child was an Electric Football game.  Invented in 1947 by Norman Sas, the game featured a vibrating play surface with players that went in various directions (rarely straight forward) propelled by plastic filaments under their bases.  Many a time did I witness one of my receivers heading for the end zone and at the last minute, bizarrely, doing a u-turn and heading the wrong way.

It was an eccentric but wonderful game that provided me with endless fun.  The kind of fun that still causes me to look back with fondness. My friend Billy had one of these games.  I am not sure of why they spelled it as Foto instead of Photo but it involved a light bulb under a playing surface that allowed each player to overlay acrylic sheets.  There were numerous sheets, each with a different defensive or offensive play shown as lines. When the lines intersected, the offensive player was tackled.  When they did not, a touchdown was scored.  It seemed pretty high-tech at the time. Football based board games have been around for a long time.  It was a good way to play the game without getting a concussion. Above is a version from Milton-Bradley. Wouldn't you love to own the Chester-Pollard game or the Kicker Catcher coin-op game at the top of the page.  Maybe its because electronics have become so ubiquitous that these mechanical versions have a great warmth and charm about them.

Do you have a favorite old time football game?  Let us know.