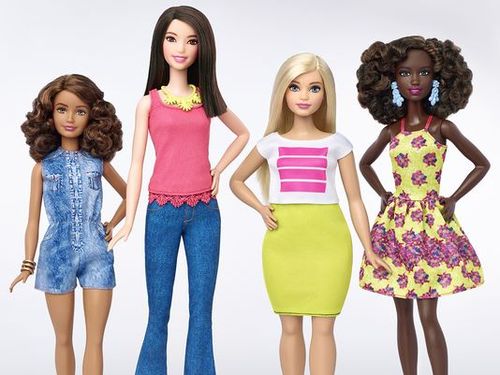 Barbie is by birth an American doll and America is a place where a person gets to reinvent herself…even when she's a doll.

Barbie is so much more than a doll.  Yes, she is made of plastic and sits on a shelf but the essence of Barbie resides in the hearts and minds of girls and women all over the world.  That's why news that Mattel was changing this iconic doll's shape and look caused such a stir in the media.   One example is a great piece on the PBS Newshour in which I was honored to participate (see below).

I see Barbie's new looks as highly significant as they bring Barbie into alignment with a world that has changed almost beyond recognition from the world she was born into in 1959.  At that time it seemed possible to define beauty as having a particular look.  In today's world, however, we define beauty in a multitude of ways and by providing "Petite", "Tall" and "Curvy" as well as racially diverse versions Mattel is responding.

Barbie has always been about aspiration; not just in terms of beauty but achievement.  After all, Barbie was in space a long time before Sally Ride.  Her desire to achieve, however, was sometimes buried under the debate over her body.  Hopefully, we can not move on from that debate.

Bottom line:  Barbie is by birth an American doll and America is a place where a person gets to reinvent herself…even when she's a doll.