Utku Tansel, Strategy Analyst – Licensing, presented the “Key Global and Regional Trends Shaping Toys Licensing” during the Hong Kong Toys & Games/Licensing Fair and Conference over 11-14 January, highlighting some of the key findings from Euromonitor International’s latest global research. His keynote speech included analysis and data on major toy licensing trends by region, as well as the hottest global properties impacting sales. Furthermore, he showcased the most anticipated licensing-related film releases over 2016 and beyond while identifying the top markets with best potential to target in the coming years. 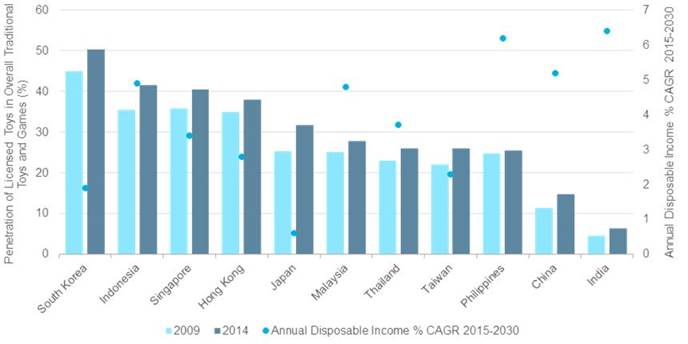 Undoubtedly, licensing is one of the key parameters driving toys sales globally. The penetration of licensed toys in traditional toys and games overall continued to see an increase across almost all markets over 2009-2014 thanks to their character narrative as well as multi-media marketing strategies, including movie releases, which all help to drive sales. Half of the top 10 most heavily licensed toys markets are in Asia Pacific, while the US is the world’s largest.

South Korea, Indonesia and Singapore are the top three countries in terms of licensing penetration in the region, with more than 40% of toys being licensed properties in 2014. Japan boasts having the largest licensed toys market in Asia Pacific in absolute terms, with sales of just under US$1.7 billion in 2014, accounting for 35% of the region’s total value sales. South Korea is the most heavily licensed toys market globally, with over half of all toy products being licensed. The South Korean government puts great effort into protecting and promoting local properties, as it sees licensing as a key component of a growing economy. Local character licensing is perceived as an important national resource which could be exported to other geographies.

Which countries are shaping up?

By looking at the largest toys markets globally and comparing these with forecast disposable income per capita, it is possible to determine which markets offer the best opportunities for licensing. Emerging economies including India, Philippines, China, Malaysia and Indonesia are projected to record strong growth in per capita annual disposable income over 2014-2030, suggesting that they could offer strong growth opportunities for licensed toys.

China stands out as the market with the greatest potential, as it has the lowest percentage of licensed traditional toys and games, at barely around 15% in 2014, up from 11% in 2008. It is also anticipated to see the strongest growth in per capita annual disposable income over the forecast period. Despite this low percentage, China is still the fourth largest market for licensed toys globally (behind the US, Japan and the UK), worth almost US$1.4 billion in 2014, cementing its position as a strong future market for licensed toys which is still far from reaching saturation. If China is able to sustain its enviable review period growth in licensed toys sales in the coming years, it would certainly not be farfetched to predict it will surpass the UK to become the world’s third biggest licensed traditional toys and games market by 2019.

In India, licensing will continue to grow, as consumers experience a higher level of exposure to both international and domestic characters through movies and television. Global evergreen properties such as Superman, Spiderman and Marvel are all popular in the country, as are local characters that are gaining equally high popularity. For instance, Chhota Bheem is extremely popular and has become a household name, while Krrish is an Indian superhero from a Bollywood film of the same name that also proved to be very popular in recent years. However, licencing faces challenges from illegal imports and fake products manufactured by local producers. While this has the potential to hamper the growth of official licenced toys, the increasing shift towards organised retail can serve to negate this threat.