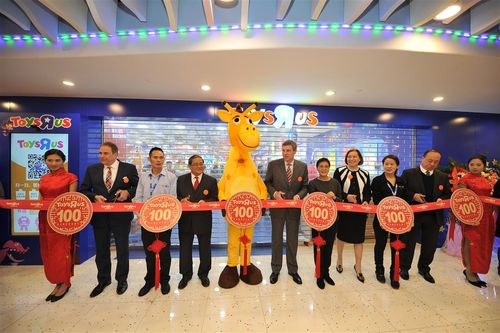 Jacqueline Vong is Vice President Licensing and Marketing; Mainland and Greater China for King Bee Toys and Co-Chair Women In Toys Hong Kong.  She is also a contributor to Global Toy News and we are proud to have her report from the grand opening of the 100th Toys R Us store in China.

I had the privilege of witnessing an historic milestone for Toys “R” Us in China when the company opened their 100th store in China on Jan 16, 2016.

This incredible eventful weekend started off with an intimate executive dinner to celebrate the key partners that contributed towards the success of the retail chain in China including the biggest local and international toy companies as well as the top TRU executives from around the globe including new CEO David Brandon based in the US and President of Asia Pacific Monika Merz based in Japan. It was a true honor to share the stage with many of the greats in the China toy business. 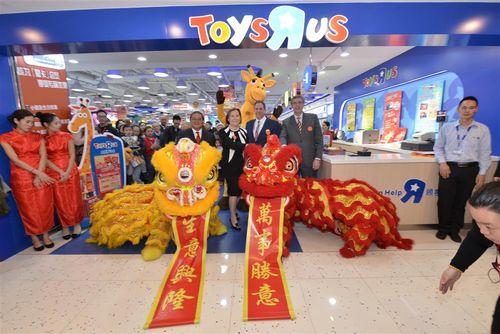 Following that, Saturday morning, January 16th, there was a grand opening celebration event that took place at the APM Shopping Mall in Wang Fu Jing, Beijing.  The new store at APM Shopping Mall showcases the very latest in “retailtainment”, digital technology and customer interaction, making shopping at Toys”R”Us a unique and fun experience for kids and adults alike.  At the grand opening ceremony, there was an exciting dragon dancing ceremony and blessing for the store along with a parade of our favorite China toy characters including Barbie, Lego Ninjago, Transformers, Minions and Balala and 3D Character displays throughout the mall that depict “100” to help celebrate this historic event for Toys R Us.

Toys“R”Us Inc., the world’s leading dedicated toy and baby products retailer, opened the first store in China in 2006 and have been expanding rapidly since.  China has been one of the important markets for the company’s global expansion plans, and growth in this region is expected to continue with the planned opening of more than 30 new Toys”R”Us stores in 2016.