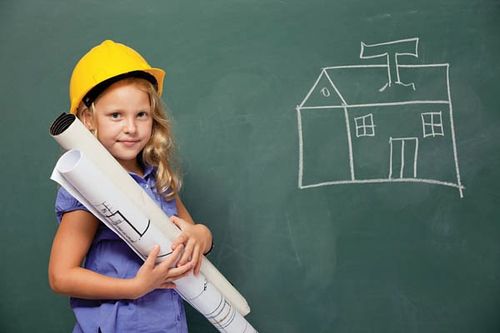 Laurie Peterson is the founder and CEO of Build & Imagine, a construction toy startup that set out to get girls building, and ended up inviting boys to play too. Laurie received the “Rising Star Toy Inventor of the Year” at the 2015 Toy and Game Inventor award show, for her magnetic construction sets that spark storytelling.

Imagine a Trojan horse dressed as a glittery pink pony, prancing down the “girls”’ toy isle in Toys R Us. A secret compartment in the pony’s belly pops open, from which a pile of pastel colored building toys tumble out. Girls sweep them up with glee and parents beam with pride, as their girls are finally building and developing foundational STEM skills (science, technology, engineering, and math) right alongside the boys.

That’s essentially what has happened these past few years. The construction category has seen explosive growth in girl players. With the success of Lego Friends, GoldieBlox, the introduction of dozens of pastel colored re-skins of classic building sets, and my own line of Build & Imagine StoryWalls, the toy industry has successfully Trojan-horsed a historically boy play mechanic (building) into little girls’ shopping carts.

Packaging building toys “for girls” was a critical step to get retailers and customers to think differently, and expose girls to important skills that come from building. Parents have embraced the trend in hopes they are empowering their daughters to overcome the gender innovation gap. Now that parents and retailers are on board, what’s next? Is labelling “engineering toys for girls” in the long run actually reinforcing stereotypes? 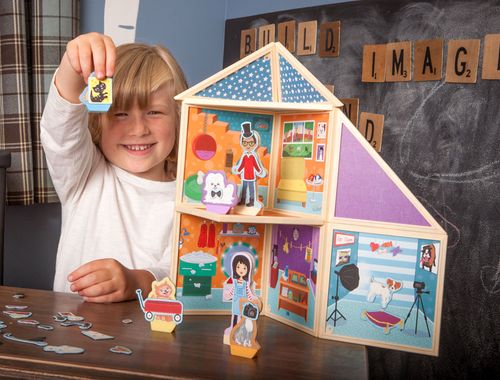 Two years ago I set out to create building toys for girls. I interviewed dozens of families, created four iterations of prototypes which I tested with girls, had a successful kickstarter campaign, paired up with an awesome children’s book illustrator, joined a startup accelerator program, kicked off manufacturing, launched five Build & Imagine StoryWalls playsets, and won “Rising Star Toy Inventor of the Year”. I live and breathe our mission to get girls building thereby helping them to overcome the STEM gender gap. Yet somewhere along the way, I decided to invite boys to play too.

Social scientists suggest that segregating toys by gender constrains a child’s development and perception of who they can become. By using gender exclusive labelling, coloring, and theming, even on something as noble as construction toys, we’re making assumptions about a child’s interests and often teaching narrow perceptions of gender expectations. Additionally, by calling out “building toys for girls” when all other in the category are simply labelled “building toys”, we’re implying the world of engineering belongs to boys and girls should exist only in this subsection.

All that may sound subtle, but trust me; kids are soaking in these signals and trying to make sense of their identity. My own five year old, like many other preschoolers and kindergarteners, has become a self-appointed gender police officer decoding which clothes are appropriate to wear and which toys are for whom. Children are looking for rules to help them organize their understanding of the world and according to Lise Eliot, a neuroscientist and the author of “Pink Brain, Blue Brain,” their brains are most malleable at this age. Toys design and marketing can make a difference by teaching a wider and more inclusive understanding of gender preferences and roles. Doing so will expand a child’s possibilities and allow them to develop into their authentic selves.

Retailers are starting to take note of this concern. In response to social media activism and the efforts of groups such as Let Toys Be Toys, Target recently removed “Girls’ Building Toys” signage and Disney stopped labelling costumes by gender. Dropping “boy” and “girl” labels in store and choosing categorizations that allow previously segregated toys to co-mingle is a good first step. In addition, toy manufacturers need to be careful of what their packages signal, dropping color coding that screams “no girls allowed” (and vice versa).

What about the content of the toys themselves? I’ve seen many parents in the blogosphere nostalgically call for a return to “gender neutral” toys. It’s true that toys have become more and more gender segregated over the years as toy companies recognize the financial benefit of selling brothers and sisters separate toys. While “gender neutral” sounds like something to aspire to, I think that all too often it’s used to mean that girls can play with what boys have typically played with, thereby devaluing typically feminine things. Instead I’d advocate for a “gender inclusive” approach in which we provide kids with a range of toy choices inspired by a wider definition of who we believe girls and boys to be, and then invite children to pick according to their interests, rather than their gender.

Build & Imagine’s first few building sets welcome girls into the construction toy category via leading girl characters and narrative driven play. Building with these sets will help kids develop foundational skills in science, technology, engineering, and math. We designed these building sets especially for girls, but please don’t expect us to say they are just for girls. We invite all kids (and kids at heart) to build and imagine with us. Through exposing our children to a wide range of play styles and themes we can help them develop a rich individualized identity and encourage the belief that all interests are open to everyone.