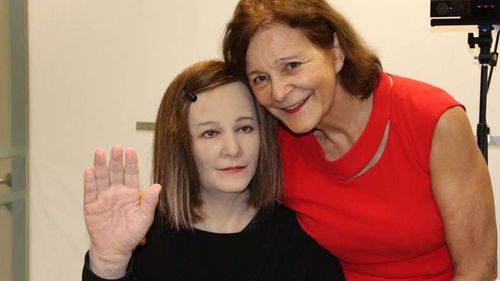 Nadine the Robot; she's the one in black

"The time and performance gap between what is a toy and what is "real" is collapsing to the point that there is barely a gap at all."

In March and again in September* I made the case for toys like Mattel's new emotive robot, "Hello Barbie", as important tools in getting children ready for the future.  Here is what I wrote:  "Cutting edge toys like "Hello Barbie" are getting children ready to live in a future where they will engage intelligent and even emotive robots and other AI devices on a daily basis."

When I wrote that, I was thinking three to five years in the future but then I read about "Nadine", a new emotional robot that was created by Nanyang Technological University Professor, Nadia Thalmann.  Nadine is, according to Ryan O’Hare's The Daily Mail article, being “… touted as the latest in a new generation of robots, capable of conversing with people, adapting their responses and remembering previous conversations.”

The Daily Mail article was topped with a rather wordy (and provocative headline): “Meet Nadine, the terrifyingly lifelike 'social robot' that looks and acts like its owner and could one day work in your office.” Nadine does, in fact, look like her owner.  That tells us that not only will robots be a part of our future but vanity will be around as well.

The time and performance gap between what is a toy and what is "real" is collapsing to the point that there is barely a gap at all (think 3D Printing and Drones).  We in the toy industry are consciously or not helping to get our children and grandchildren ready for a future that is already here.  This is an exciting time to be in the business of play.  In fact, its a pretty exciting time to be alive.

*"Hello Barbie Makes the Cover of The New York Times Magazine" and "Hello Barbie; playing with the future," I wrote: