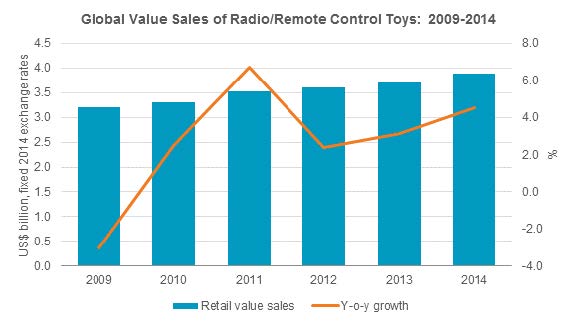 Taking playtime to the skies

Drones have rapidly become integral radio/remote control toys as consumers of various ages have become interested in these products. While the category has had flying products for some time, these were mostly contained to helicopters and planes. Now,
however, drones have started to make up a strong portion of sales for numerous companies as consumers enjoy the easy aerial manoeuvrability as well as the ability to take videos with these drones. While drones with video capabilities used to be mostly confined to the professional market, toy makers are increasingly introducing new drones capable of taking high definition video due to interest amongst children in creating their own videos to share with friends and online. Various companies previously primarily involved in helicopter or plane toys have taken note of this demand for drones and have added the product to their portfolio to great effect, such as Air Hogs, which saw its value sales grow by 25% over 2009-2014 globally within radio/remote control toys.

However, these products may face some regulatory challenges as numerous governments have grown concerned that they may be a safety issue. Drones have been blamed for causing incidences, such as disturbing an aircraft by flying too close to it, as well as hampering firefighting efforts. The US Federal Aviation Administration is considering introducing regulations that would force operators of drones or unmanned aircraft systems to register their devices. This registration may have a more limited effect on toy drones, as drones under 250g would be excluded. In addition, Europe has had numerous countries create their own rules prohibiting drone flights and requiring registration, and the European Commission is considering instituting regulations on drones for the entire European Union.

Drones are not the only products that have been changing the dynamics of the radio/remote control toy category, as robotic products have started to become much more popular. Products like Zoomer Dino and WowWee are receiving increased interest each year due to the higher level of interactivity that these products provide. Robotic toys are also now seeing a boost due to Star Wars licensing. After "Force Friday", an event which took place on 4 September 2015, where toys for Star Wars: The Force Awakens were revealed, one of the most popular toys was the BB-8 remote control toy, which rapidly sold out. These toys not only have ever increasing levels of sensor sophistication that allow them to interact with their environment, but they have also started to become controllable with smartphone apps, which is the case with the BB-8 by Sphero.

Radio/remote control toys are expected to do much better than the global forecast for all traditional toys and games, and the category looks set to see retail value sales increase at a 4% CAGR between 2014 and 2019, in no small part due to drones and robotic products. The sophistication of radio/remote control toys is only going to continue in future, as much like the consumer electronics industry as a whole, the cost of making high-end sensors and higher-strength batteries will likely go down with time and lead manufacturers to create even better and more capable robots and drones. In addition, new products will likely enter the market that will further divert radio/remote control toys from its car-centric roots. Playmation, which was released by Disney in partnership with Hasbro in October 2015, is a toy that uses Bluetooth and other sensors to allow children to interact and play with a toy that features numerous Disney characters from the Marvel and Star Wars universe.