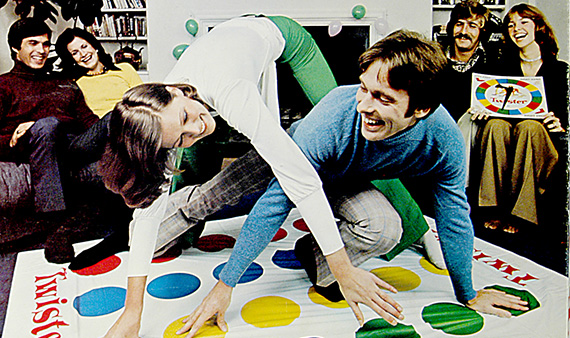 When Twister’s three developers brought the concept to game publisher Milton Bradley in 1966, the firm agreed, initially, to manufacture the game. All it took was a demonstration of the play and they were persuaded. Twister’s play was simple and innovative. It had few rules, and never before had a boxed game’s players served as the playing pieces. But the public, at first, seemed tentative about the game. We know, today, that every game of Twister can cause peals of laughter on all sides. But just before the holidays that year, Sears, Roebuck & Co., one of the nation’s major retailers, refused to offer the game in its annual catalog. Sears found the idea of players of both sexes in such close contact too new and too risqué. I’m guessing that, unlike the team at Milton Bradley, nobody at Sears saw an actual game played. The retail giant disliked the idea of the game—and that put Milton Bradley in a (pardon the pun) spot.

We know now that Milton Bradley took Sears’s announcement seriously and stopped the game’s production. But a PR firm had placed the game in the lineup for Johnny Carson’s The Tonight Show before the show got news of the game’s cancellation. 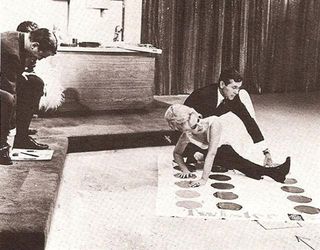 Carson played the game with his guest, the lovely actress Eva Gabor.  The audience roared with show-stopping laughter thanks to Carson’s well-timed facial expressions, Gabor’s exotic Hungarian accent, and her low-cut dress. The bit was hilarious and flirtatious, but not scandalous. The next day every copy of Twister flew off the shelves of the one store which stocked it. And Milton Bradley quickly resumed production. Twister proved a runaway success and has sold well ever since—all it took was a demonstration. Milton Bradley soon promoted the game with a television advertisement—the first of many—which also showed a game in progress. That, combined with the Johnny Carson spot, helped Twister sell more than three million units in 1967 alone. But there’s more to Twister than sales figures. Over the years, the game has spread most among younger children. Eventually Milton Bradley (now Hasbro) marketed directly to younger age groups. Don’t underestimate Twister’s benefits to youngsters. It builds basic motor skills such as coordination and balance, and experts point to the benefits of the simple game play for building socialization skills. Children learn to negotiate rules, take turns, and challenge each other. They develop problem-solving skills. Recent brand extensions such as Twister Moves incorporate dance and music into the game, and the newest innovation, making Twister safe for the youngest toddlers, includes an inflatable plastic mat to soften any fall. At nearly 50 years old Twister is still a winner for all ages, hands (and feet) down.