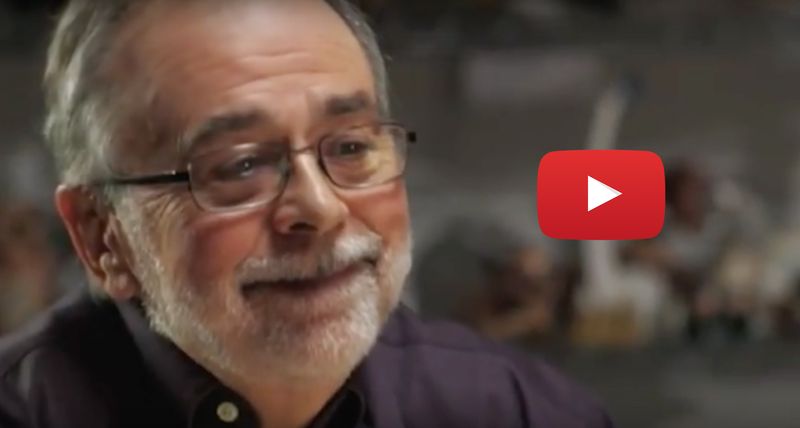 Tuscany. Wood shaves piling up on a workshop floor. The humming of an old woodworker’s voice as his work nears finish. But the creation is no shoe, no table, no chair or bench. Nothing so simple and lifeless. On the counter before the gray-haired Geppetto is a wooden marionette, almost complete, awaiting the adhering of his last piece. The old man’s careful hand slides his knife across the ridge of the piece, pauses for a moment, and mumbles his satisfaction. A little glue, a careful placing, and Pinocchio has his nose. Geppetto pauses again. Perhaps… Perhaps that wasn’t the last piece after all. Out the window and in the sky, Geppetto’s eyes settle upon a star. He makes his impossible wish.

The story is Carlo Collodi’s The Adventures of Pinocchio, or rather, Walt Disney’s 1940 animated adaptation of that book. But, to those who have known him even briefly, the tale might just have been that of Richard J. Maddocks, toymaker.

Richard has just been told that he will be awarded a Lifetime Achievement Award at the Toy & Game Innovation Awards in Chicago. I sit with Richard Maddocks in his office at Hasbro’s Pawtucket, Rhode Island headquarters, listen to a few of his many stories, and try to better understand the mind and heart of this snowy-haired, wizard-like toymaker. He has surrounded himself with his creations, his innovations, and his characters. Shelves, desk and floor are piled high with Fur Real Friends cats, dogs, parrots, 17 years of Furby models, assorted interactive Yodas and E.T.s, Elmos and Cookie Monsters, and even the four-foot-tall pony, Butterscotch. Some of those toys are retail products, others are test models and prototypes, and still others are intriguing fur-less plastic skeletons. His table is strewn with gears, foam, fabrics and a few servos. He is a warm, charming, and unassuming man with a childlike sparkle in his eye, whose small stature casts a remarkable and enduring creative shadow over the modern toy industry. He speaks humbly of his toyography, 500+ toys including Matchbox, Mattel, Tiger Electronics, and Hasbro. He is a working legend, a pathological tinkerer, and a fount of knowledge and experience pivotal to making the greatest animatronic products become far more than just toys. He’s also more than happy to avoid the spotlight and continually insists that everything is “a team effort.” Richard started designing toys in 1971 and never stopped. The 1980s and 90s hosted a seismic shift in the internal complexities of our playthings. Robotics, animatronics, electronics, speakers, microphones, sensors, switches, lights, gearboxes, cams, motors and computer chips became the norm, not the exception. Toys were professed to “come to life” using technology. And it was Richard’s toys that often came closest to life, to answering Geppetto’s impossible wish upon a star, and even perhaps to having souls of their own.

Richard was born in England in the later days of World War II, 1945. Speaking of his early childhood, Richard notes that his first house in the Suffolk countryside had no electricity, no indoor running water, and Europe’s wartime food rationing was still in effect.

Richard’s father was a farmer, carpenter and handyman named Philip Maddocks. Spanning a lifetime of uncanny innovation, Philip would read news of the Wright Brothers’ flight, gaze upward to see the Spirit of St. Louis take to the sky, and sit beside his son to watch the first man walk on the moon on a black and white television set. He made models, intricate and impossible to young Richard’s eyes, using everyday objects like watch parts, matchboxes or tiny shards of glass. Listening to Richard describe his father, it seems to me that Philip gave Richard the twinkle in his eye, the designer’s mind, and that impossible imagination.

Richard’s mother, Kathleen, gave him his calm, sincere, and compassionate heart. Richard fondly remembers living in a large guesthouse built in the ruins of an ancient monastery that his parents ran for the Suffolk Diocese. As manager, Kathleen always remained calm and courteous in the face of any carfuffle. She would teach her son to avoid reactiveness. She’d say, “You know what makes them madder? Staying calm.” She actively encouraged Richard’s imagination, and creativity. After graduating from Luton College of Technology in 1969, Richard quickly found his way from England to Detroit, Michigan and into a General Motor’s “job shop” where he worked as a truck chassis draftsman. Work, layoff, road trip, and a year later Richard was back in England. After a few months, he was in Hackney Wick in London’s East End. This time he was drawing an entire vehicle, but on a much smaller scale. From GM to Matchbox Toys, Richard was about to find his reason for being. A job that started as a temporary filler lasted fourteen years designing toys from dolls to track sets, including the introduction and development of the Live-n-Learn preschool line.

Shedding the security of the corporate world, in 1985 Richard embarked on a new venture as an independent toy inventor. Richard first partnered with Dennis Wyman in England. The 50/50 no quibble “you make it, I sell it” relationship worked well for both parties. Richard entered his relationship with the Wymans expecting to sell toys, not expecting to find a wife. One day, while working with Dave Wyman, there was an unexpected knock on the door. In walked Nancy. Matching her husband in warmth, charm, and creativity, Nancy’s eyes twinkle with mischief that beautifully contrast Richard’s own childlike aura. Until that door opened, Richard intended an early night. But, Richard tells me with his biggest smile, that isn’t what happened. Nancy was an American film editor who carried a handbag full of maps. The business meeting quickly dissolved into a visit to the local pub where Nancy ordered a “pint” of beer. Now, a proper English lady does not order pints of beer. Incidentally, one of those maps in Nancy’s handbag must have lead straight to Richard’s heart… and eventually back to the States. Once they could no longer afford the international phone bills (remember this was still in the dark ages of landlines-only communication), Richard and Nancy decided to get married. Richard packed up his drawing board and headed west. His partnership with the Wymans carried on and out of that period came Playmates Baby Grows. But the distance was taking a toll. It was time for a change. Enter Richard Levy, a well-established inventor based in the U.S. The two Richards joined forces and out of this partnership came Oops and Downs, Max Steel Super Scan, Switch Blade, Steel Tec Motormania and many more creations. Then, in 1998, life was about to take another dramatic turn and not just for Richard.

Prior to its stunning premiere at New York Toy Fair in 1998, the Furby prototype wasn’t quite performing as required. With a commercial shoot and Toy Fair looming, Richard was called to the rescue. He never knew what hit him. After 36 sleepless hours, the prototype was ready for prime time. This was Furby’s grand debut and the Toy Fair verdict was in: Retailers wanted Furby. They wanted lots and lots of Furbies. And they wanted them for the 1998 holidays. Richard thrives on an impossible challenge and boy did he get it. Now Furby had to be mass producible. With impossible production deadlines coupled with extraordinary demand, Richard was charged with getting Furby production ready. He called in his brilliant and dear friend, design engineer Peter Hall, and along with a wacky Israeli machinist who could work miracles with a Bridgeport mill, the race was on. 16-hour days for weeks on end, quickly Furby started coming together. Meanwhile, Hasbro was in negotiations to acquire Tiger. Once again an unexpected door opened that, even in his wildest dreams, Richard never could have imagined. With Hasbro on board, Richard and company were transported to Pawtucket, Rhode Island where the best possible product development resources were made available. Now things really moved forward and the rest is history. Furby fever hit globally and forty million were sold over three years. Hasbro clearly made a wise investment. The age of the animatronic toy had arrived.

Once Richard set up camp at Hasbro, he never managed to leave. As one project was ending, another began and he was spending more and more time in Rhode Island away from his home in Washington D.C. After two years, this freelancer had become a fixture around Hasbro on the emerging team developing animatronic creatures and toys including Yoda and ET. This team of multi-disciplined and highly talented experts had evolved into ‘The A Team’ as Richard puts it, masters of what Richard often refers to as ‘The seamless integration of engineering and aesthetics’.

All that remained was for Leif Askeland, director of the newly formed animatronics team, to offer Richard a staff position. After working so hard to stay out of the corporate structure, this was a heart wrenching decision for Richard. In the end, Nancy made the decision for him. If Richard planned to continue working at Hasbro, the only way Nancy would even consider moving was if Richard accepted the staff position along with the security and stability of a regular paycheck. Richard knew, deep down, that he had landed in a place with remarkably talented, like-minded people with whom he would thrive.

Sitting in Richard’s office surrounded by dozens of FurReal Friends, I discover how these amazing life-like animals came to be. Early in 2001 during a brainstorm surrounded by shelves of Yodas, ETs, Furbies and other assorted fantasy creatures and robots, Mike Iaconis, one of the team, said, “why don’t we try something real?” The obvious response, “like what?” “How about a cat?” replied Iaconis. And so it was, the first FurReal Friend to hit the market was a cat. FurReal Friends became a huge success, spawning hundreds of animatronic pets and animals.

Richard stayed with the team until the end of 2014, and was responsible for the development of many other animatronic and mechanism-intensive products including Elmo, Cookie Monster, My Little Pony, and Baby Alive to name but a few. FurReal generated unexpected fans. Richard recalls Amazon reviews, emails, and handwritten thank you letters from caregivers, sons, daughters, husbands and wives who had given their elder loved one a FurReal Friend and watched the joy it gave them. Richard was deeply touched by these remarkable stories. He visited assisted living facilities and gave talks to the residents about how FurReal Friends were developed. Each session ended with plenty of time for everyone to hold and interact with the animals. For nearly a decade Richard quietly championed the idea of creating a line of robotic pets aimed at comforting the elderly. After forty-four years in the toy business, at the beginning of this year, Richard joined Leif Askeland in Hasbro’s New Business Group. This small start-up team is working to apply Hasbro’s expertize in play outside the toy aisle in the health and wellness category.

The first product release, dubbed Joy For All Companion Pets, is a cat. With the project green lit by senior management, Richard was finally able to seize the opportunity and motivate the team to raise the bar even higher, delivering a line of groundbreaking animatronic products in this new venture.

The release date for the first Companion Pet is almost as challenging as Furby’s, but Richard remains undaunted. He’s done it before and will do it again. He grins and points to a quote adorning a wall of the team’s work area. This quote perfectly sums up Richard’s unique talent for effortless-seeming creation. The sign is a variation on the motto used by the U.S. Army Corps of Engineers during World War II:

“Where the impossible takes slightly longer.”