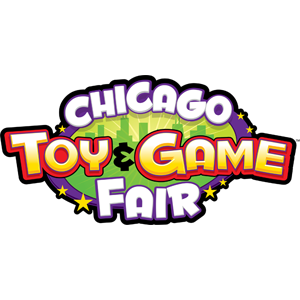 It is rare that those who make toys get to play with those who consume them. The Chicago Toy and Game Fair (ChiTAG) is a major opportunity for that to happen.  The event, taking place this weekend at Navy Pier, was surprisingly busy yesterday.  I say, "surprisingly", because those who attended had to make their way from the Chicago suburbs through a surprisingly heavy snowstorm.

How heavy was it?  Well, to give you a sense of that,  I am writing this as I unhappily sit in a hotel room near O'Hare Airport, having had my flight home last night cancelled.  So, it says a lot about the vigor of Chicago's denizens and the strong appeal of ChiTAG that so many would fight through so many snowflakes.

And one more thing:  Children and their parents seemed to be deeply engaged.  As one of exhibitors told me: "Families came to play."  And play they did.