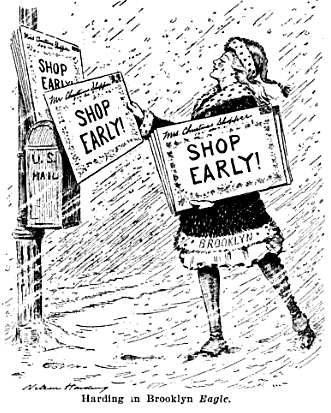 It's the Christmas selling season so we are hearing complaints about the commercial aspects of the holiday starting earlier than ever.  We are also hearing concern regarding stores being open 24 hours over the Thanksgiving holidays.   Is this a recent problem?  Well, no it is not.

First of all, lest you think that retailers were once more reserved and reluctant to commercialize momentous events to make a buck consider an ad placed just after the fall of Richmond, VA during the Civil War.  "Richmond has fallen and so have our prices! at Western Hall Clothing House."  That ran in an April, 1865 Chicago Times.

According to an interesting article by Paul Collins in  Slate, "Christmas Season Starts Earlier Every Year!": "Like so many of our retailing habits, early shopping dates back to the late Victorians. Along with inventing cash registers, mail-order catalogues, and escalator-filled flagship stores, the Victorians also discovered the value of starting the Yuletide shopping season before Thanksgiving."

Here is an ad from October 28, 1928 that read: “This may SEEM a little premature to you — but it really is NOT — for you do not have many days left in which to do your Christmas buying.”

In thinking about the urgency of these 19th and 20th century ads, it has occurred to me that these were generations that did not utilize credit cards and when, in fact, using credit was somewhat suspect.  Maybe people needed to remember early so that they didn't spend their money on other things…like alcohol.

So, for whatever reason, people have been complaining about Christmas starting early for a very long time.  "T'is the season."