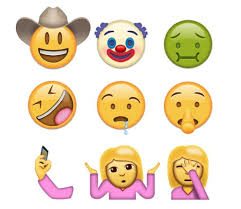 Invented languages are languages that  did not form naturally but were artificially constructed, sometimes by one person.  For example, the most popular invented language is Esperanto created by L. L. Zamenhof in 1887.  Its still around and 2 million people speak it.

There are over 40 such languages with a list that includes Volapuk, Interlingua and of course Klingon.  And yes, there is a Klingon version of "A Christmas Carol."

But, I digress.  I wanted to talk about a pictographic language  to which we all need to pay more attention. That is Emoji, those little faces and icons.

I came to this conclusion when I read that the Unicode Consortium has announced that 67 new emojis will be voted on for inclusion in the emoji lexicon.  Who votes; companies like Google and Universities like U.C. Berkely but apparently not you and me.

Never-the-less, this whole global language is growing and it seems to me that the toy and play industry should begin using it for basic communication about our products.  Imagine packaging, directions and websites that include emojis as a key elements in explaining the product.

It would be fun and it would be simpler than all of that translating.  What do you think?