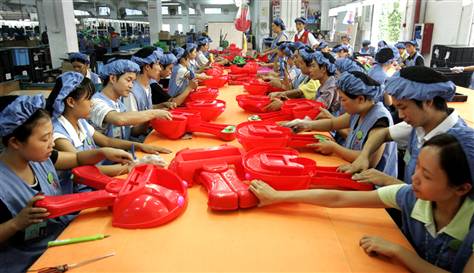 In my last posting, I wrote that the Chinese Communist Party has announced they are ending their "One-Child" policy.  The policy, that had been in force since the 1970's, restricted parents to one baby per household.  Going forward they will allow two.

The "One-Child" policy successfully blunted China's birth rate and resulted in some true benefits.  It also resulted in some unintended consequences; some of which have had an impact on those who produce products in China.

Bottom line, today's Chinese young adult worker is fewer in numbers and expects more then prior generations.  Because they are fewer in numbers, have aspirations and are less willing to work, there  are fewer workers available to fill toy factories and that puts upwards pressure on wages and sometimes plays havoc with production planning.

The change in the law will certainly result in more workers but it will of course take a generation.  And they in turn will come to the workplace with their own unique world view.

So in the meantime, when we think about China and its workforce, we need to stop seeing them as an amorphous group of workers knocking out toys.  Rather they each individuals with unique dreams trying to work their way through a world that provides new challenges every day.  This is the today's Chinese worker.