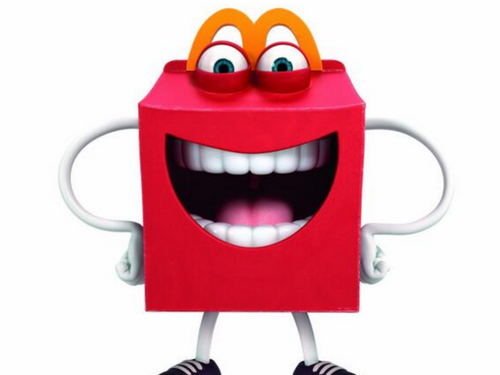 Suzy Y. Chang-Smucker has 14+ year of experience in toy and product design and is a graduate of Otis College of Art and Design, class 2001.  She grew up in Chatsworth, CA, graduated from US San Diego, lived in Chicago, and now resides in Columbus, OH.  She has worked for toy companies like Pleasant Company (now American Girl), Processed Plastics, Corgi Classics, MGA Entertainment and Creata.  Suzy is now a Creative Girl Wonder at Tantrum Baby Designs and has been working on a variety of freelance creative projects.  She has been married for over 8 years and has 3 beautiful children, ages 5, 3 and 1.  She is kept very busy managing her business as well as being a mother and wife.  Her children are her inspiration to so many things in her life, especially in the design field.

Happy Meal…McDonald’s Happy Meal..What can I say about this icon of my childhood?  One of the best memories of being a kid…the surprise toy that you get in a box.  Imagine my excitement when I was able to work on Happy Meal Toys.  And when I say work on, I mean brainstorm, draw, work with amazing designers, sculptors, engineers, and account managers, create artwork, presentations and be a part of the presentations, was a dream come true.

To a child, the toy is magical and amazing.  To me it was that and more.  The process in which these magical toys are created is unbelievable.  The quick turn around time from art board to production to the stores is unthinkable.  All within a year’s time (or less), these magical wonders make their appearances in stores to be treasured in little kids hands and in collector’s treasure troves.

It all begins with a meeting.  We started by getting a brief from our Chief Creative Officer who would give us the low down of which movie or property was on the calendar.  There were licenses that would be evergreen properties, like Barbie and Hotwheels, or Littlest Pet Shop, and then there were the blockbuster movies hits like Transformers and The Lego Movie, and of course, there are the toy big hits like Skylanders that have become a huge niche and success.

Once our Creative team got the download on what program we were working on then we were sent out to brainstorm.  Brainstorm consisted of doing retail research, online and in the bricks and mortar retail shops, as well as in some of the most interesting shops that were not deemed toy shops.  I used to spend days or hours in these stores simply perusing the aisles for creative inspiration.  A few of my colleagues used to call it “Suzy-Shopping”.

When I would walk through these stores, I would take photos, although it was frowned upon by the employees, and have in my very distant past, escorted out since it was “not-permitted” to take photos of  products in store.  This was back in the day were I had to tote my digital camera around.  These days, it is much easier to be incognito when taking these “illegal” photos in the stores since the awesome invention of great quality cameras on smart phones.

I would take copious notes via voice recorder and take down the price points, features of toys and products that stood out and could be relevant in my brainstorming process.  And of course take a ton of photos.  I would not just limit myself to the toy aisles because my process was to walk down ever aisle so that I could think and soak in what is on shelf, and the price points.  Sometimes I would walk through the housewares/kitchen aisle and find inspiration.  Other times I would find weird toys, like a 6” Sumo Wrestler wind up toy that was holding a ball tethered on a string.  Once this guy was wound up he would spin around and with the spinning force, it would cause the ball to then lift up and spin around.  This toy was inspiration not only for myself, but for other creative on my team.  Plus, it was horribly sculpted and painted, but was effective nonetheless.

A lot of the times, notes and photos would not do justice, which then led me to purchasing a ton of different toys.  (I HAD to buy that Sumo Guy…too good not to)  I would then unload my bags full of goodies on my desk and review my notes and photos.

When on my hunt for treasures,  sometimes I would be in search of different mechanical features, other times I would be looking at material features and other times it was just to look, for looking sake.  If we were in between programs, I would still go to retail just to see what types of trends were going on.

The next step in the brainstorming journey was to sketch…super blue sky sketches, loose, like kids drawings, or chicken scratch.  Other times I would just create a long list of ideas.  Some were good, some were bad, and some just left a giant question mark in my head as I would revisit my lists.

Headphones were a must during this part of the creative process.  I would crank my Pandora list of music of inspiration, loud, so I couldn’t hear anything but my own thoughts.  I would then either get my drawing paper and pencil out, or I would go straight to my Cintiq for my chicken scratch.  Chicken scratch that would hopefully turn into a toy or a line of toys.

We would work on our concepts for about a week, sometimes more and sometimes less, just depended on the need.   We would get the email/meeting notice about concept review…many creatives, myself included would get butterflies in our stomach and be second guessing all of our concepts…hoping that we had the next “pick” from our Chief Creative Officer.

We all would huddle up in the conference room and do a soft “pitch” on our toys that we ideated, sometimes with sketches, sometimes with images from the internet for inspiration, but the best way to show was to have samples to show what you wanted for the toys.  Some times there would be ideas that would show up three or four times on the wall by different creative.  Other times there were ideas on the wall that would make us all kind of perk up our ears because it was so different.

Once our soft pitches were completed, then items/drawings would get “flagged” with a post-it or sticky.  There were usually 2 – 3 different post it note colors, categorizing the different toy “programs” that were possible.  There was also careful though ton what would be best for the license/property and we always were looking for innovation and things that have never been done before, especially for a very low price point.

Now, I could continue to reveal the next steps of the toy process, but then where would the mystery lie?  This was a glimpse into the Creative process….there is more to be explained so stay tuned.  #ToysAreAMystery.