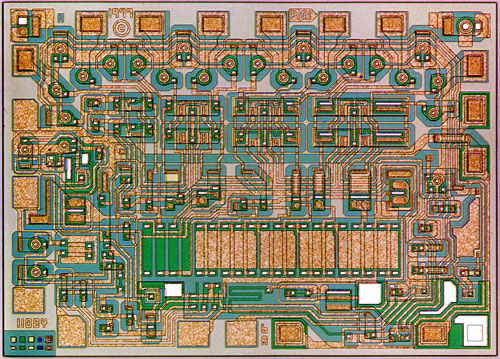 Moore's Law: The prediction that the number of transistors that can be placed on an affordable integrated circuit will double during a specific time period, usually said to be every 18 months or every 2 years.
American Heritage Dictionary

One of the givens since 1960 has been "Moore’s Law", the observation that the number of transistors on a circuit will double every two years.  Why does this happen? It’s due, at least in part, to our ability to make transistors smaller and smaller.  The technological payoff has been smaller and more powerful devices.  The economic impact has meant sharp reductions in the cost of these devices.

Here is how John Markoff, puts it in his New York Times article: “Smaller, Faster, Cheaper, Over: The Future of Computer Chips’”:  “That improvement — the simple premise that computer chips would do more and more and cost less and less — helped Silicon Valley bring startling advances to the world, from the personal computer to the smartphone to the vast network of interconnected computers that power the Internet.”

So what happens when Moore’s law finally slows down?  We may find out sooner than later.  According to Markoff:

Technologists now believe that new generations of chips will come more slowly, perhaps every two and a half to three years. And by the middle of the next decade, they fear, there could be a reckoning, when the laws of physics dictate that transistors…will not function reliably. Then Moore’s Law will come to an end, unless a new technological breakthrough occurs.

Never underestimate technology and its ability to innovate, particularly when faced with a crisis.  So, I wouldn’t bet that a slow down in Moore’s law would necessarily result in a slow down in innovation.  There does seem, however, reason to anticipate that there could be a time-out in rapid advancement as industry adjusts to changing realities.

The toy and particularly the digital play industries have benefited from Moore’s law.  What will a slow down mean for the toy and play industry.  Here are some thoughts:

Traditional toys have, for the last few years, been overshadowed by the new and marvelous.  In a world of magical play, a simple doll or miniature car can seem very 20th century.  Yet, traditional toys provide an essential tool for imaginative sensory-based play.  They will never go away and during a time out there well may be a renewed appreciation for the most elemental forms of play.

Markoff makes the point “that…the slowdown in chip development will lead to more competition and creativity."  If the chase is less for the cutting edge and more for the bottom line, prices will drop.  That is good for toys and play as they depend upon providing high value for low cost.

The New York Times article makes the point that we will see chips "… at the end of this decade [that] will in some cases not even require batteries — they will be powered by solar energy, vibration, radio

waves or even sweat.”  What toy company couldn’t feast on that kind of breakthrough just think of the potential?

The notion that “the only constant is change” holds no exception for the toy industry.  Bottom line: Let’s stay grounded in the present and maintain an eye on the future.