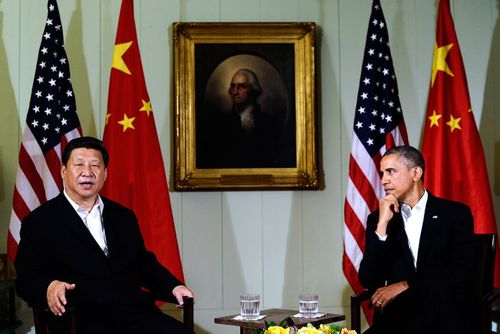 President Xi of China and President Obama held a joint press conference on Friday. Whatever is gleaned from press conferences of this nature is, for many, refracted through what the press deems to be important.  But how do the results of their meetings directly impact the toy and play industry?  Yes, reducing greenhouse gases and attempts to decrease cyber attacks are hugely important but what will have the most direct impact on how we do business?

So, I thought it would be interesting to look at what was said at the press conference through our own lens. What did they have to say that would have the biggest impact on those of us who engage in the business of play.

Its important because China produces 86% of the world’s toys, is a major market for American movies and a growing market for western toys.  What happens in China does not stay in China but impacts the health, wealth and prosperity of the world’s merchants of play.

Below are some quotes from the press conference and my comments:

President Obama: We’ve committed ourselves to a set of principles for trade in information technologies, including protection of innovation and intellectual property.  President Xi discussed his commitment to accelerate market reforms, avoid devaluing China’s currency, and have China play a greater role in upholding the rules-based system that underpins the global economy…

We’ve agreed that neither the U.S. nor the Chinese government will conduct or knowingly support cyber-enabled theft of intellectual property,

Those who do business in China know only to well the concern that building in products in China will result in knock-offs.  That was why I was impressed by the reinforcing comments from the Xinhua News Agency, a service owned by the state of China.  The article entitled, “Xinhua Insight: Better IP protection promises bigger fortune for China-U.S. firms,” has this to say:

China's IP regime is almost brand new. Prior to 1980, when China joined the World Intellectual Property Organization (WIPO), the concept of IP was almost unknown in China and the value of IP had yet to be recognized. Only in the 1980s did the country pass its first trademark and patent laws.”  The article summarizes by stating:  “If China genuinely wants to become a center of global innovation, significant improvements in IP protection are still needed.”

It is a good thing for the toy and play industry that this issue has been addressed by both leaders, a first.  President Xi’s mention of it in his remarks plus the Xinhua article should give us hope that there will be more stringently applied legal protections.  What we will have to watch closely is what practical steps will be taken.

President Xi:  "…there is no basis for the renminbi to have a devaluation in the long run. At present, the exchange rate between renminbi and U.S. dollars is moving toward stability."

Western companies and Chinese manufacturers desire, above all, stable currency exchange rates.  A Chinese currency that is strong in relation to the US dollar can cause the price of goods to go up and for western consumer resistance to kick in.  A weak Chinese currency can cause western goods to be out of reach of many Chinese consumers and similarly depress sales.  It can also create problems for Chinese manufacturers who suddenly find themselves to have quoted prices that are no longer financially rational.  It is therefore important for the toy and play industries that President Xi supports a stable currency.

President Xi: We have decided to make 2016 a year of tourism for China and the United States.  In the next three years, we will fund a total of 50,000 students to study in each other’s countries.  We also welcome the United States’ decision to extend the 100,000 Strong initiative from universities to elementary and secondary schools, and by 2020, 1 million American students will learn Mandarin.

President Xi inadvertently misstated the initiative from the US as it is actually called “1 Million Strong.”  President Obama called it an initiative “…to encourage 1 million American students to learn Mandarin Chinese over the next five years.”

One of the handicaps to American companies doing business with Chinese companies has been a scarcity of Mandarin speaking Americans who also have a feel for Chinese culture and societal norms.  This initiative could hopefully create a real boost for all of us as we employ more workers who can actually speak to the other side.

This is a pretty wild world right now and things change quickly.  These stated objectives do, however, hold out hope for improved means for Chinese and Americans engaging in cross-border trade.