There will be a wonderful exhibition of antique toys that will kick off on October 1, 2015 at  The Liberty Hall Museum on the Kean University campus in Union, NJ.    The show is called Toys Through Time and it features toys from the mid-19th through mid-20th centuries.  In order to find out more about the exhibition I contacted Rachael Goldberg, Collections Manager at Liberty Hall Museum.

Richard:   The Toys Through Time exhibit is of particular interest to those of us in the NY, CT, NJ areas. Can you give us a brief description of the exhibit and what visitors can expect to see?

Rachael:  The exhibit will encompass five rooms of the main house tour. Visitors will see rooms filled with all sorts of toys – trains, experiment sets, sporting equipment, dollhouses, dolls, tea sets, board games such as Tippecanoe, Magnetic Jack Straws and Chiromagica, and other fun knick-knack toys. In our exhibit spaces, we will continue with our toy collection and include hands-on activities for our visitors young and old.

One the coolest components that we’ve added to this exhibit is the use of augmented reality with interactive posters. We’ve selected six toys, which were made into posters by students in the Kean University Robert Busch School of Design. Once the poster is scanned with a smart phone or tablet, a fun add-on to the toy is shown! For example, our Mr. Machine has a matching interactive poster which when scanned, plays an original commercial for the toy.

We hope this exhibit will bring together families and that the young and the old will bond over childhood toys. An added bonus would be for today’s kids to realize there are different types of games to play with than just electronic games.

Richard:    What is the origin of the toy collection?

Rachael:  Liberty Hall Museum was a family home from 1772 until 1995. The generations of families that lived here never threw anything away, including toys. Our general collection ranges from furniture to decorative arts to clothing, etc.  Our toy collection roughly dates from 1850 to 1950, with a handful of toys that pre and post date that 100-year time period. We have over 600 toys in the collection that range from trinkets, to dollhouses, to ride-on fire trucks. 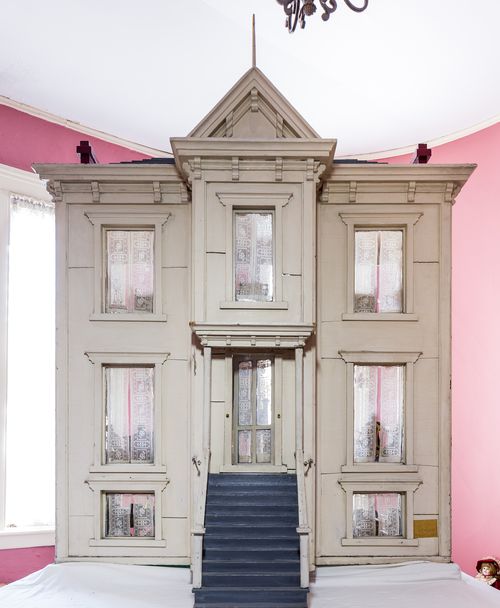 Richard:   The exhibition is taking place at Liberty Hall Museum on the campus of Kean University in Union, NJ.  A university, a museum and toys; can you tell me how all of those pieces of the puzzle fit together?

Rachael:  The museum, once the home of the Livingston and Kean families, opened to the public in 2000. In 2007, the museum and the university, which is located on property that was once the Kean family farm and is named after the Kean family, merged to create a wonderful educational experience for the Kean student body and the museum.

For the past five years, the museum has been working with students from the Robert Busch School of Design to create exhibit items such as: logo, text panels, exhibit guides, and promotional posters etc., and this exhibit is no different. We have added a new component to this exhibit with the use of augmented reality through interactive posters, all of which were created by Kean students. Anyone with a smart phone can download the free app, Layar, to use these posters or can use one of the iPads the museum has to offer. Visitors will be able to scan the poster, which will reveal a fun additional element to the toy. It has been amazing to see what the students have created for this exhibit.

What’s also great about working with the Kean students on this particular exhibit is how they learned not only about the evolution of toys over the past 100 years, but also saw American history and culture reflected in the toys. 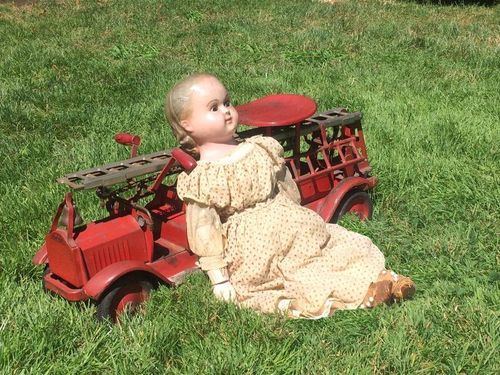 Richard:    Are there any particular items in the collection that might interest members of the toy and play community?

Rachael:  We have a lot of fun toys in our collection. Here are some of our favorites which should be of interest to the toy and play community:

Liberty Hall Museum has a magnificent New York “Brownstone” type of dollhouse which was made in 1878. The dollhouse has nine rooms, all filled with different types of dollhouse furniture. Another fun dollhouse we have is a Mary Magpowr Dollhouse, which is from 1963 and is magnetic. Children can simply set up the dollhouse and furniture and use magnetic wands to move the people.

A staff favorite is Mr. Machine from the Ideal Toy Company in 1960. Mr. Machine was the first toy that could be taken apart and put back together. He also has a clear body so you can see his inner gears working. You can wind him to move, and he also says, “Ahhh!”

Another game in our collection is a quiz game called, “Veda, the Magic Answer Man” in which you open the booklet to the question and answer pages, spin Veda to what question you want answered, and then move him to the answer page where he spins and points to the correct answer.

We also have four rocking horses, each from a different era and each made differently. They are fun to compare and contrast.

The collection includes several World War II games, which were produced to help with the patriotic effort of children. One game, which is fascinating, is “Bombs Away!”  It consists of a corkboard painted with the scene of a town and port.  Children use the eye-sight bombardier to drop bombs, which are darts, on the town. Each building on the corkboard is worth a different set of points and the most points win!

Richard:    How can people support the exhibition either by visiting or donating?

Rachael:  To officially open this exhibit, Liberty Hall Museum and the Kean University Foundation are hosting a benefit soirée on Thursday October 1, 2015, from 6 p.m. to 9 p.m. This is a ticketed event, which will include food, beverages, interactive games, and a sneak peek at the “Toys Through Time” exhibit, which will be held in our Carriage House. The proceeds from this event will help Liberty Hall Museum’s educational programming. To purchase a ticket, donate and learn about sponsorships or journal ads, please visit www.keanfoundation.org/toy2015 or contact Chrissy DeMarco at 908.577.0106 / rodemarc@kean.edu.

The museum is open for public tours Monday through Saturday, 10 a.m. to 4 p.m., with tours every hour. For more information on exhibit tours, please call the museum at 908.527.0400 or visit  www.kean.edu/libertyhall.